History of Alabama vs Florida series 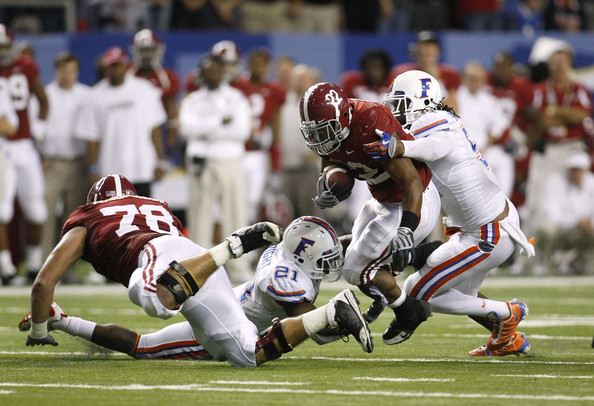 This will be the 25th SEC championship game which started back in 1992 with a classic game between Alabama and Florida. This coming Saturday Alabama and Florida will face off for the 9th time in the SEC title game. Alabama has a 4-4 record against the Gators in the SEC championship game winning three out of the last four. Las Vegas has Alabama posted as more than a three touchdown favorite against the Gators.

This series has seen Alabama dominate the early days and then saw a swing to Florida dominating under Steve Spurrier in the 1990's into the early 2000's. Then after losing to Urban Meyer in his first meeting against Florida in the 2008 championship game, Nick Saban has now won five in a row establishing dominance again over the Gators. Below are the results of every game played between Florida and Alabama. 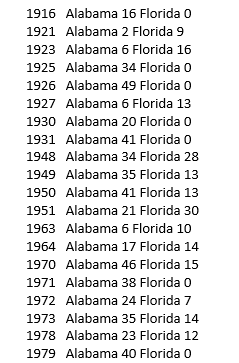 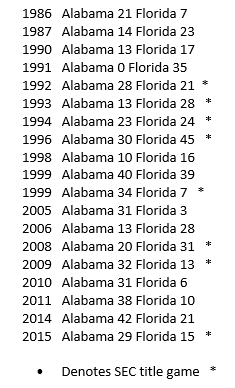 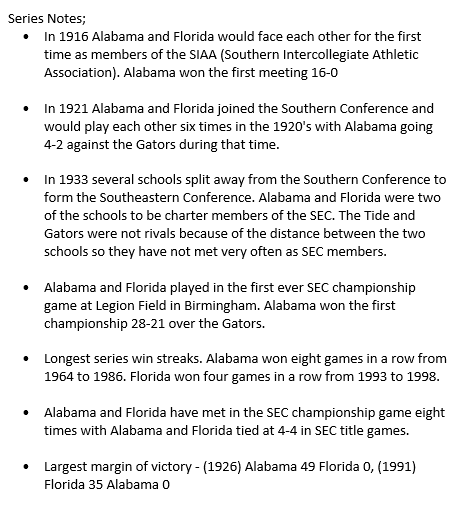 1994 - Third ranked Alabama would face the sixth ranked Florida in the first SEC championship game hosted in the Georgia Dome. After trailing at halftime 17-10, Alabama would carry a 23-17 lead late into the fourth quarter. But a Danny Weurffel touchdown pass with 5:39 left in the game put the Gators up 24-23 and they would hold on to win by that score killing Alabama's hopes for a national championship.

1999 - Twenty first ranked Alabama would travel to the Swamp to take on the third ranked Gators in a game very few thought Alabama had a chance to win. Alabama had lost 7 out of 8 of the previous meetings against Florida. But the Tide led by Shaun Alexander would not be denied in this one. Florida led by a touchdown with just over three minutes to go in the game when the Gators fumbled a punt and Alabama recovered the football. Shaun Alexander would soon find the endzone and Alabama forced overtime with the score tired at 33-33. Florida scored a touchdown in overtime but missed the extra point. Shaun Alexander scored on a 25 yard run the first play on Alabama's ensuing possession in overtime. Alabama also missed the extra point but Florida was called for being offsides. Alabama was successful on the next attempt and the Tide came away with a huge 40-39 victory over the Gators.

2008 - This was the first time #1 would meet #2 in the SEC championship game. Alabama came into the game as the top ranked team in the nation with Florida on their heels at number two. Alabama would take a 20-17 lead into the 4th quarter. But Tim Tebow would lead the Gators on an 11 play 62 yard drive to score the go ahead touchdown with 9:21 left in the game. Florida would put the game away with an 8 play 65 yard drive to score a touchdown with 2:50 left in the game to secure a 31-20 victory over Alabama. Florida would go on to defeat Oklahoma in the BCS championship game to claim the national title.

2009 - Alabama and Florida would have a rematch as the top two teams in the nation. Florida entered the game #1 with a perfect 11-0 record while Alabama was undefeated with an 11-0 record and ranked #2. Alabama would take a 19-13 lead into halftime and looked like the game would go down to the wire. But Alabama's defense shut out the Gators in the second half while the Tide's offense added a touchdown in the third quarter and another early in the fourth quarter to win going away 32-13. The game will forever be remembered seeing Tim Tebow in tears on the sideline as he see's his chance go out the window to close out his career with another national title at Florida. Alabama would go on to defeat Texas to win the national title.

Inside look at Alabama and the Southeastern Conference

Preview and prediction for Alabama vs Arkansas …

Robert Craft the owner of the Patriot was caugh…