Can we just talk about this Sabres Stars game from last night for a second. I went to sleep rattled and woke up angry because of the nonsense that took place with the poor officiating and the goals that were potentially taken away from us during that 3rd period.

Lets start with the first non-goal with about 8 minutes to go down 4-3. The puck was clearly in the net, here's two videos with different angles:

From the first video you can clearly see the puck is on edge and in the net and the goalie, Kari Lehtonen, just happen to be laying over it blocking the view from the officials. The Dallas broadcast even admits to it saying, "It is in". In the second video showing a different angle you see more of the same. He makes the save then lays there motionless, then gets up and the puck is sitting in the net. Not only is Jack Eichel standing behind the net pointing at it but Lehtonen, recognizing that the puck is in the net kicks its out almost to say, "Wow, I hope they didn't see that".  Of course it was ruled no goal and the blind people in Toronto didn't have conclusive evidence (common sense) to overturn that ruling. Jack Eichel and Sam Reinhart were both frustrated when asked about it after the game.

Then with about 2 minutes and 18 seconds left in the 3rd period, still down 4-3, the referee calls a horrible penalty on Zach Bogosian. I don't even know what the call was and I cant find any video of it but just let me assure you that it was absolutely atrocious. This was the 5th penalty of the game for the Sabres and just back breaking at that point in the game. The Sabres were dominating the 3rd and had a handful of great chances to that point and you could feel a goal was coming and that penalty absolutely killed us. Then with just about 18 seconds left we get back to full strength and have a great scoring chance with 11 second left and by now everyone has seen the videos and pictures: 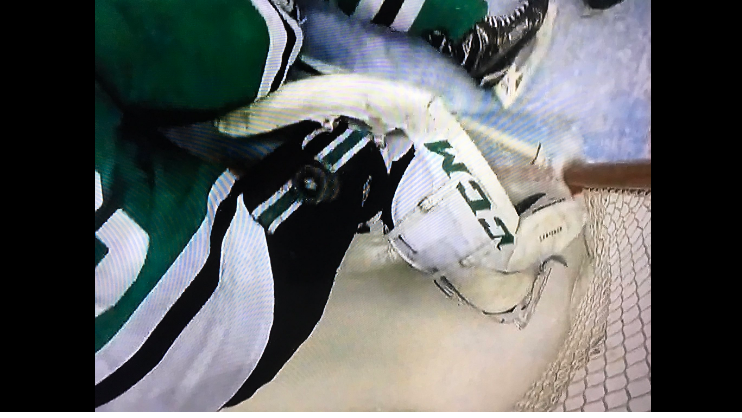 This one I can understand why they couldn't see it in real time or during the reviews. Although it very well might be in the net it is so close and it all happened in a split second. It's just unbelievable given the angle and everything else that the puck somehow didn't get in the net, its just terrible luck. Also given what had already gone on it just makes the whole thing unbearably frustrating. That was a big game going into the All Star break and getting a win and adding to the 3 game win streak would have put us in a good spot moving forward.