I would first like to start this recap off with some important stats that I believe have effected the Timberwolves season the most. With a 9-13 home record, which ranks 12th in the western conference and a lousy 5-15 road record that ranks 13th in the conference the Timberwolves are practically irrelevant when it comes to playing on their home court. No team is going to make the playoffs with a sub .500 home record in either conference. In order for the Timberwolves to start moving up the power rankings and into serious playoff contention, the team needs to start establishing a home court advantage that helps them win tight games. What good is home court if there's no advantage to it? Another stat that was striking to me was the minutes played by the Timberwolves "Big Three", Karl Anthony-Towns, Andrew Wiggins, and Zach Levine. All three rank in the top ten for minutes played in the league with Levine playing 37.24 minutes, Wiggins at 36.89, and Towns at 35.90 minutes a game. Thibodeau is a great coach but lets not forget about the big injuries that happened on the Bulls under Thibs command such as Derrick Rose tearing his ACLs, and Joakim Noah having to sit the majority of his final season with the Bulls with a shoulder surgery. Many thought the causation of the injuries to the star players was Thibs over playing and overworking his players to the point where they became injury prone in the future. With Minnesota's "Big Three" all under the age of 22, it makes me uneasy that their minutes are so high so early in their career. 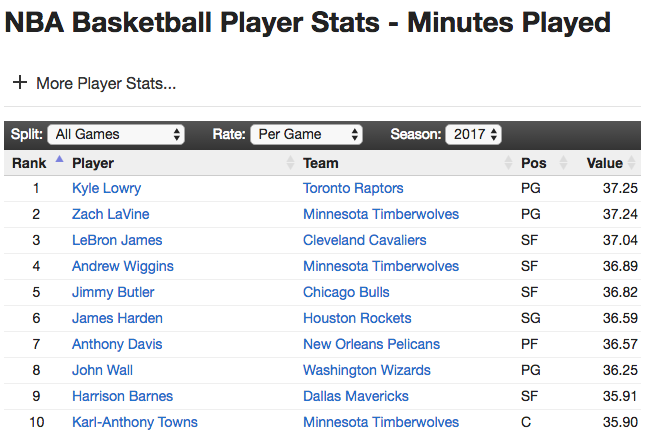 Top 10 Players Who Have Played The Most Minutes This Season

TImberwolves have never been known as a three point shooting team but as the league rapidly changes from a slow pace big man game to a fast pace high scoring game, the best NBA offenses in the league center around one thing, the three point shot. Halfway through the season, the Wolves are shooting a measly 34.9 percent from the three point line which is ranks 21st in the league. Other than Levine, who is shooting a respectable 41.4% from the three, the Timberwolves starters aren't exactly sharp shooters from the three. Brandon Rush, who has been riddled with injury for most of the year was a free agent who the Timberwolves signed to come in off the bench and spread the floor with his respectable three point shot. Rush who has only played in 16 games this season has been seeing very sparse playing time when he as been healthy and I think that's a mistake. He has the highest three point percentage on the team shooting 44.8 percent and I think he is underutilized as a key role player on an already thin Timberwolve's bench. The point is that in order for the Timberwolves to start staying in games down the stretch against playoff teams they need to either trade or sign a player who can spread the floor and have a three point shot that can keep the other team honest on the three point line, freeing up space for the rest of the team. 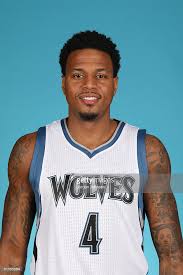 If you haven't heard buzz already, there have been a lot of trade rumors surrounding a couple Timberwolves players. Ricky Rubio and Shabazz Muhammad are both on the trading block as the Timberwolves look to make some moves before the trade deadline on March 1st. The Wolves, in return for a Rubio Muhammad package trade, would like to get a veteran 'bridge' guard that can come onto the team and play with the first unit until Kris Dunn, the 5th overall pick by the Wolves in the 2016 draft, is ready to take the reins at the point guard position, but who knows when that's going to be. The only team that has shown any interest in acquiring Rubio and Muhammad are the Sacramento Kings but as the trade deadline approaches and Rubio's stock continues to rise with his great numbers as of late, the Wolves might be seeing some pretty intriguing trades from some teams who will want to add some depth to their bench as they go into the playoffs.

Even with a 14-28 record, the Minnesota Timberwolves and their fans still have a lot to look forward to in the future. With one of the youngest starting lineup in the NBA, the Timberwolves have three players the age of 21 and younger that average over 20 points a game this season. That has never happened in NBA history. If the Timberwolves organization can keep the key pieces on the team and build around them with veteran players who can facilitate games, there's a bright future for the young pups.

Student at the University of North Dakota. Timberwolves Fan circa 95' If you don't like it, than don't read it.

Giving you your Timberwolves fix. Writing what people think.

Then and Now: A Quick Trip Down Memory Lane. 20…