I was at the Giants game against the Rockies last night. Beli-EVEN magic happened 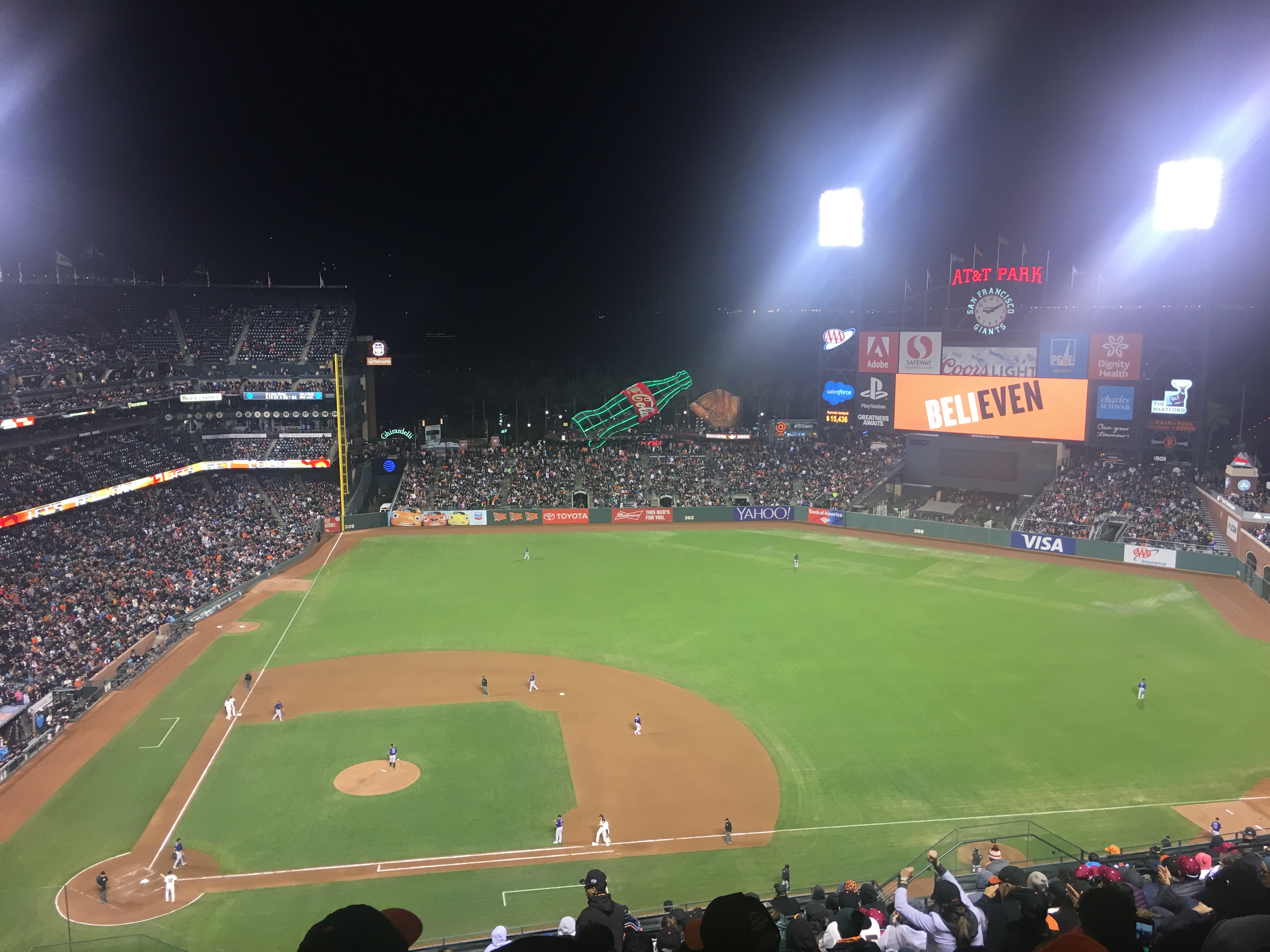 I always like sitting here. Might be because I love that I can see my breath when I exhale in the cold.

Got free tickets to the Thursday night game against the Rockies, and of couse me being me, I was the first person to claim them. Good thing I jumped on that first because my coworker sitting across from me snagged all the remaining tickets. By the way she didn't even go to the game. Some family who brought their children sat in her seat. Friendly reminder to everyone, please don't bring needy children to night games and events, they always complain. Wait a minute, I'm not a parent, what the hell am I talking about? Uhh......

When Charlie Blackmon hit that double in the first inning of the first pitch of the game, the reaction coming from me and everyone else around me was "really, I came to a game where this shit is going to happen?" Then Nolan Arenado hit a RBI double to bring, Blackmon home and two batters later David Dahl tripled to bring in Arenado to make it 2-0 at the end of the to of the 1st inning. The struggle offense from the Giants happen in the 2nd and 3rd innings, like when the Giants couldn't bring Pagan in who hit a triple in the previous at-bat. Cueto got settled in and got into a groove after that 1st top of the half. I remember after striking out Blackmon to end the top of the 4ht, he looked up at the scoreboard with that look of "C'mon guys, help he out here, I'm keeping us in the game." The the Giants offensive explosion happen, Crawford grounded out to shortstop, which brought Posey in to score, oh yeah! Then more of the Giants typical run scoring that has been scene since 2010, a blooper from Joe Panik that went over the shortstop and hit into the Bermuda triangle of the outfield. When that happened, I was like "Oh thank god, now my time going to this game won't go to waste." I paid $13.80 to take a ferry from the other side of the Bay Area to come to San Francisco for the game with my family. Anyways, here's that hit from Panik:

The fun part and eventual game winning run came in the 6th inning. After the go-ahead game winning sacrifice fly from Conor Gillaspie, who had a good game at the plate, 2-2 with a RBI and a run. Johnny Cueto came up to bat. I had my phone ready and I'm telling my sister "I'm getting ready for when Cueto hits a double." Well, I didn't get the full at-bat, but at least I got the reaction from the crowd:

Technically, Cueto got the 2nd base with a bunt single and an throwing error from Nolan Arenado. So that's good enough. More runs where tacked on in the Giants half of the 8th inning and Sergio Romo sealing the victory for the Giants in the 9th and everyone going go happy.

Other Thoughts and Takeaways:

- Going into this game, the Giants need to win four straight games to secure a spot to play in the wild card game. They got one, now they must sweep the Dodgers for the final remaining games at home of the regular season. Surely the Dodgers will comply with the Giants and just allow them to win, but they want to play spoiler, those bastards.

- As always, I get the bacon-wrapped hot dogs from the vendors that are outside everyone Giants home game. I rated it a 8/10 that night, I didn't get enough of the bacon that was wrapped around my hot dog. But the cool thing was that I was able to put the ketchup, mustard  and mayo on my hot dog because they usually put it on themselves. So thanks to that dude.

Talking Sports From The City By The Bay And Beyond

Guarenteer locks of predictions for the 2016-20…