The AFL was, at one point, doing alright for themselves when it came to teams. But over the course of two weeks, the AFL landscape shifted drastically. Following the ArenaBowl, the AFL's version of the Super Bowl, the LA KISS and Portland Steel franchises folded. Shortly thereafter, the Jacksonville Sharks and Orlando Predators also folded their franchises. With four other teams in the league and Arizona being the only team out West, it was only a matter of time before the Rattlers were going to make a move. Shurts did not want to be a part of a league that he felt was losing too much money, and he himself was not sure the league could stay afloat. With so many teams dropping out over that last few seasons, that seems understandable. It wasn't too long ago that the AFL did not play due to bankruptcy. Scott Butera did, however, make a statement about the commencement of the 30th year of Arena Football, even with only four teams.

So now the big question is, can the Arizona Rattlers stay the Arizona Rattlers. The Spokane Shock moved to the IFL last year. They had to rebrand itself and become the Empire this year because of the steep price it would have had to pay the AFL to keep its logo. The Iowa Barnstormers were also once an AFL team, but they were able to keep the team logo because they left the AFL in good standings. It will be tough to see if the AFL would just let its most well-known team walk off into a new league with the same name. Shurts did say that they did want to stay the Rattlers, and I hope they do. They led the league in average attendance with around 13,000 per game, and there is a lot of tradition behind the Rattlers franchise. Have I mentioned that they are the winningest team in AFL history? The Rattlers played 24 years in the AFL and won 279 games, and also appeared in 10 ArenaBowls(they won five of them). That being said, you can bet that Butera and the suits at AFL will do all they can to either make the Rattlers pay a whole lot of money to keep their namesake or make them rebrand.

So what's the big difference between the AFL and IFL? Well first off, the Rattlers are going to need a team. From what I understand, every Rattlers player is now a free agent in the AFL now that the team has begun the process of switching leagues. I am not sure if the Rattlers can resign any of the players or if the players can only stay with AFL teams, no one else. It would not surprise me if the AFL would not let any of its players try to leave and be with the IFL Rattlers, but that is just my speculation. I would imagine that the IFL will have some sort of expansion draft for both the Rattlers and Salt Lake City, as well as the current free agent pool from that league. But if the Rattlers can keep their current group of guys, then that problem is solved. When it comes to on the field play, the biggest difference is that the AFL has nets on both sides of the endzone. Those nets are game changers. If I as a quarterback threw the ball against the net, that ball is live. My wideouts can catch it off that. Likewise, so could the other teams' corners. The same goes with kicks too. If i boot a kick and it goes wide, that ball is fair game. So with the nets playing a key role, the offense is heavily focused on passing. The IFL does not have these nets. This means that running the ball will have more of an emphasis on the offense. One of the biggest differences is that 'Halfback' is an actual position on the IFL roster(AFL has a fullback position, whose emphasis is on protecting the quarterback from the blitzing linebacker). 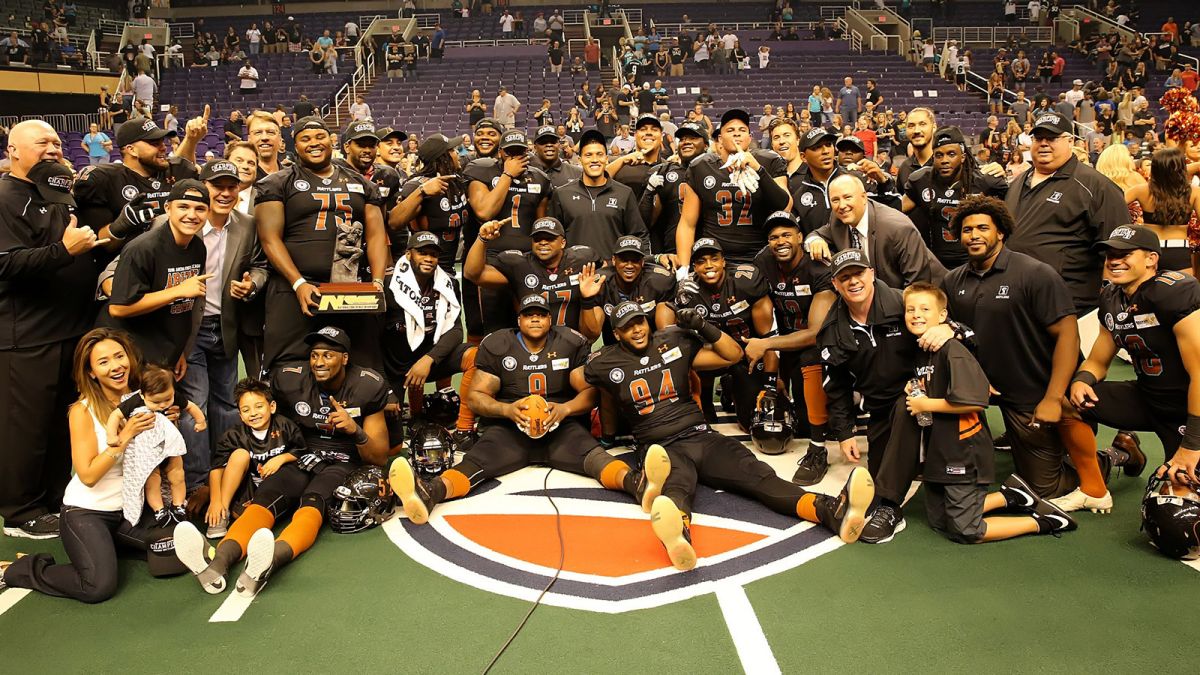 I hope that the move turns out well for the Rattlers. In general, I hope that the IFL can gain a foothold in American sports. I think that whenever people hear the phrase 'Arena Football' they have the same look like they would when a kid does something he thinks is funny and awesome, but is actually just really freakin weird. The grin, a slight chuckle, and a slight shake of the head. And you know what, it's a start. Not the best one, but a start nonetheless. Maybe the IFL can become league everyone wants to go to, since the field is only 50 yards, so there's less field to get a concussion on. I'm telling you, this can work. Start with getting a lot more teams. Variety matters. The IFL can pick up defunct AFL team, like the San Jose Sabercats for example, and bring them into the fold. Once you get, like, 28 teams, you have yourself a strong league. Then, once you work out sponsorship deals, a new, revamped advertising campaign can kick off, and the rest will play itself out. The AFL and IFL both have a common goal. If you are a football player that was amazing in college but just can't cut it, Arena football was supposed to be there to be kinda like a buffer zone, so the college football star can get a feel for the game before jumping up to pro. What could end up happening, is that while the college studs that are trying to get a feel for the game, you can also get guys that are on the opposite side of the spectrum. Guys that are legends, but instead of retiring they stay free agents and just fade away. I'm looking at you guys, Ed Reed, Andre Johnson, Roddy White. It could be a nice mix of youth and leadership. While there are not that many examples of guys making the big leap from arena football to national football, Kurt Warner did just that and won a SuperBowl. It can happen.

Las Vegas Officially Set to Raid Oakland of its…

Is Anyone Actually Surprised Leicester City Are…