Arsenal victimized by The Bayern Machine yet again 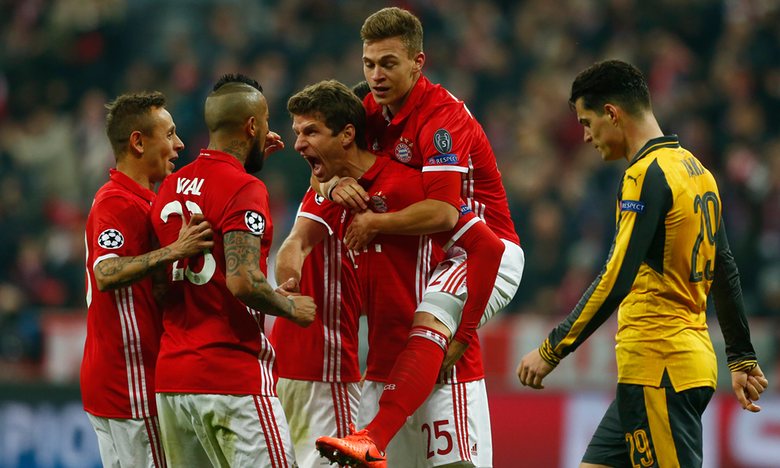 Bayern goes up 5-1 on aggregate after dismantling Arsenal in Munich Tuesday evening in the UCL Round of 16.

Arsenal inevitably became the poster child for Bayern Munich's victimization of its opponents in Champions League play following an abysmal 5-1 defeat Tuesday night in Munich during the first leg of the UCL's final 16.

Barring a historic comeback from the Gunners, this will be the third time in five years that Bayern has eliminated Arsenal in this round of the Champions League. The Gunners were eliminated by Bayern in 2013 and 2014 in the final 16 and have not advanced to the quarterfinals since 2010.

What started out as a hopeful match for the English side after Alexis Sanchez's game-typing penalty in the 30th minute quickly irrupted after Bayern found the back of the net three times in a span of ten minutes thanks to Thiago Alcantara's brace and Robert Lewandowski's header. Arsenal center back Laurent Koscielny's injury in the 48th minute did them no favors. The back-line defense quite simply could not contain or fend off Bayern's lethal attack, which was finished off by substitute Thomas Muller's 88th minute strike.

Bayern's pressure in Arsenal's final third of the pitch was consistent and opportunistic. Goaltender David Ospina found himself out of position numerous times as Bayern took advantage of the keeper's mishaps. The German side held 74% of the possession with 24 shots, half of which were on target.

This marked the highest amount of goals conceded by Arsenal in the first leg of a UCL knockout match. Bayern has scored 8 goals against Arsenal its past two Champions League meetings.

It was yet another embarrassing showing from Arsene Wenger's side at the European level. Arsenal may have solid year-to-year contention in the Premier League, but when it comes to the UCL, there has been no such luck for the London-based club.

It became so ugly that the Arsenal fan section at the Allianz Arena booed the club off the pitch after the final whistle. Wenger responded after the game with utter despair, a familiar feeling for the Frenchman on the losing side against a superior opponent. "Overall I must say they are a better team than us, they played very well in the second half and we dropped our level. We were a bit unlucky we dropped our level and they were better than us," said Wenger.

The result was nothing new for Bayern Munich, who have won a Champions League-record 16 consecutive home games. Bayern has advanced as far as the UCL semifinals in seven of the last nine years, including three straight times since the 2013-14 campaign. According the FiveThirtyEight's Soccer Power Index, Arsenal's chances of reaching the quarterfinals sit at 1%.

Arsenal faces many decisions regarding Wenger's future at the club with his contract up at the end of the season. The French boss has been listed on the hot seat for some time now, but with the Premier League title hopes all but gone, Tuesday's defeat to Bayern puts his future in London in serious jeopardy.

Can The Gunners and its fanbase really cope with one more failed season under Wenger? I wouldn't bet on it.

Your weekly place for the best matches of the week

More Articles by Hockeyfan in The Futbol Fix

Kowalski, Pugh Come Up Big In Draw With Current…

Red Stars Look To Continue Their Streak of Six …