So, how did I end up spending a week playing baseball with greats like Matt Williams, Mark Grace and Luis Gonzalez? Well, unlike my fellow campers that scrimped and saved the required $4000+ to attend the camp, I won a contest.

Before this whole fantasy camp thing, I was in the midst of one of the more prolonged and brutal depression episodes that I had experienced in a long time. It started about midway through November. I’m not sure what set it off. Maybe it was the upcoming holidays. Maybe it was the impending birth of my 6th child. Maybe I was just lost and not sure what I wanted to do with my life, now that I had quit teaching to stay home and work with my wife. I don’t know. What I do know is that everyday was a struggle, and if you’ve ever felt the cold blanket of depression, you’ll understand how difficult it can be just to have the energy and motivation to make it through the day. I feel badly that my wife had to carry so much of the load during that time, especially considering the pregnancy and the holiday season.

It was during this depressed state, that I was mindlessly scrolling through Twitter, because what else is there to do when depressed besides wallow in the depths of social media? I came across a post about this so-called Dbacks Fantasy Camp. I had heard of it previously and thought it was a really cool idea, but never had the funds to pull it off. I saw in the tweet, the Dbacks were having a contest. All anyone had to do was make a “highlight” video to show your baseball “skills”. They would pick one video and that person would get a free Fantasy Camp experience. I mentioned it casually to my wife. She probably thought this would be a good activity to get me out of my doldrums. So, she offered to help make the video. The only problem was that I had only 1 day to do it and that day happened to be the day before my wife was scheduled to have our 6th child.

My wife has more grit than anyone else I know. She dragged me and our 4 year old out to Freestone park to make a little video, while 38 weeks pregnant. She filmed me doing such amazing things like, throw a ball, hit a ball, juggle 3 balls and catch a ball behind my back. Riveting! I thought it was lame and so last minute that I wasn’t even sure I would post it. So, we went to brunch and spent the day in last minute preparations for the new baby. That evening, hours before the deadline, my wife reminded me to submit the video because she didn’t spend her morning at the park watching me toss a ball for nothing.

So, I did some quick editing, but thought it was missing something. So, I inserted a clip from The Natural (one fo the best baseball movies) and of course a clip from the Tom Emanski baseball training commercials I vividly remember watching on tv as a child. It was cheesy. My “announcer voice” voiceover was used to ensure pure cheesiness. I added a bit of light music to top it off and hit send. 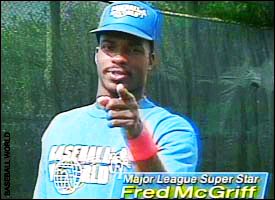 Well, of course I checked my email and twitter during the downtimes at the hospital, but heard nothing. I was trying to remind myself that I knew I wasn’t going to win anyway, but it still nagged at me somewhere in the back of my mind the whole weekend. The day we returned home from the hospital, I thought that I should check, just in case I missed something. Well, it wasn’t but a few minutes later that I found out I had won!

Congrats to our #DbacksFantasyCamp winner @realcoachpaul! And to all of our other entrants, be sure to check your DMs. ???? https://t.co/bjV6zUQ54f

I don’t win a lot of contests, so this was pure shock and excitement.  I am not going to say my depression magically disappeared, but I did notice a difference after finding out.  The stress of life had gotten to me a lot I suppose, and this was something to look forward to that was stress-free and fun.  My beautiful daughter being born along with this exciting news brought some of the light back in my eyes.  It was like a new beginning in some ways.  This news couldn't have come at a better time in my life.  Jeff Rodin called me a few days later and I got all the information. It was official. I was going to be a Dbacks Fantasy Camp attendee.

#DbacksFantasyCamp Sedona "Red, It took me 16 years to get here. You play me, and I'll give ya the best I got." @Dbacks @DbacksAcademy pic.twitter.com/UMU6a0XaH4

Other Posts About Arizona Diamondbacks