In the Midst of a Storm, Riviera Shines

It was said to be the ‘biggest storm in 12 years,’ bringing rainfall at a rate of a half inch per hour. High winds and heavy showers thrashed Southern California through the night. By Saturday morning, the bunkers looked like overfilled tea cups and a fallen tree lay across the cart path near the third hole. That same afternoon, to the surprise of many, the fairways and greens were ‘very playable.’

Dustin Johnson would eventually win the 2017 Genesis Open, but you could argue that the grounds crew turned out the tournament’s best performance. Superintendent Matt Morton was prepared for the worst, and he got it. Morton doubled the size of his staff ahead of the event, and on Saturday, his team began work in the pre-dark darkness, pumping water from the bunkers and clearing away piles of eucalyptus leaves. By the afternoon, we were playing golf again. This was more than good drainage. It was yet another testament to Riviera’s greatness.

What is it that makes this old course so special? I considered that question as I crossed through the gates off Longworth Drive and wandered onto the grounds. I was instantly reminded of Riviera’s remarkable ability to turn back the clock. It doesn’t take much to imagine Ben Hogan striding up those fairways. You can look up at the clubhouse and see the shadows of Hollywood stars, cocktails in hand on the balcony. Make your way to number 12, and you can still sense the ghost of Humphrey Bogart, posted up against that old Sycamore tree. Yes, there’s still a kind of magic about the place. 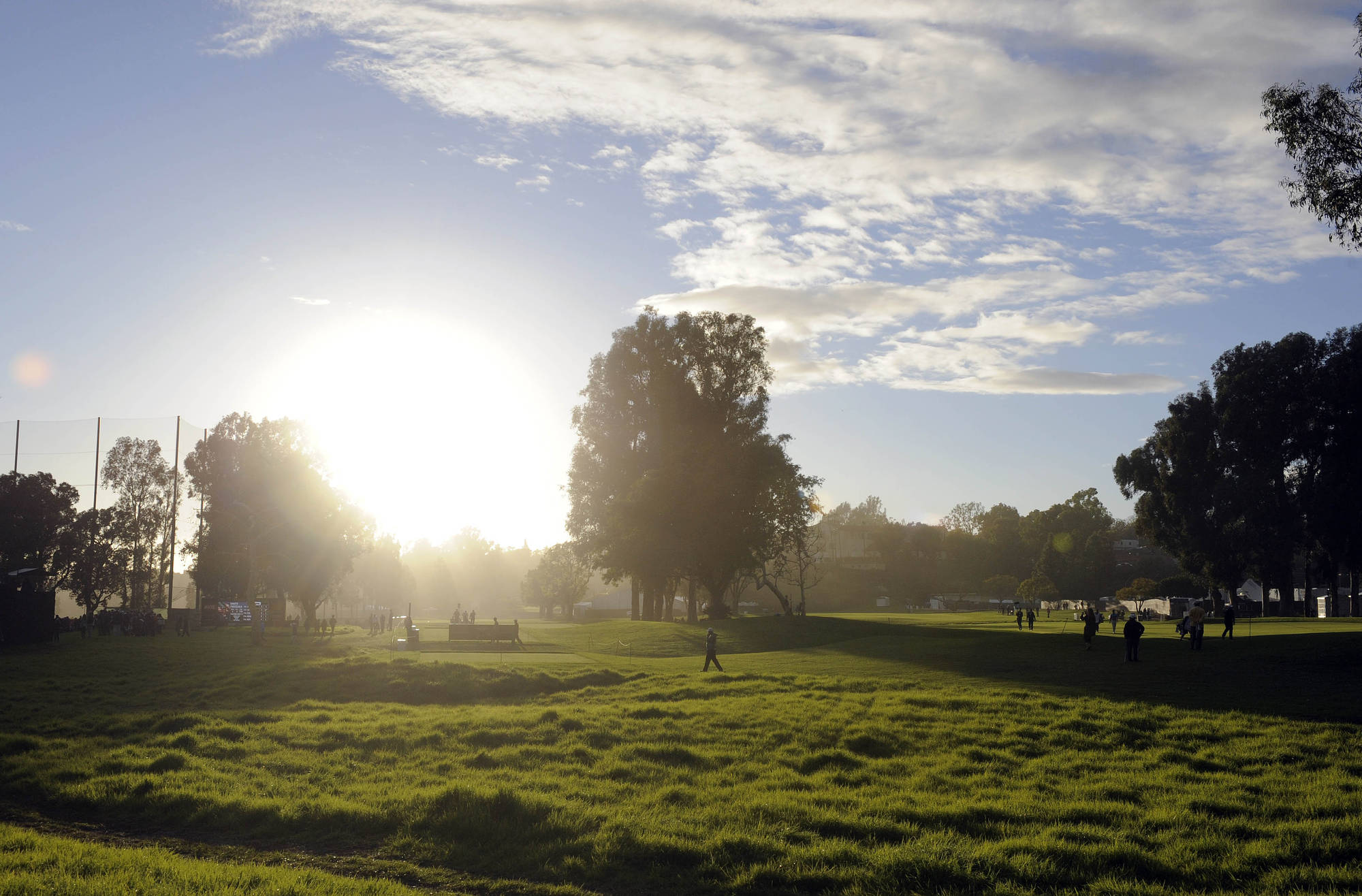 As the final round began, I checked the scoreboard and discovered that the tournament was basically over. After shooting a 64 in the third round, played earlier that morning, Dustin Johnson had a 5 stroke lead. He then started the fourth with back to back birdies. He had stayed red hot in the short time between rounds, and it was pretty clear nobody was going catch him.

While it robbed us of any suspense, it wasn’t enough to spoil the day. For me, it was a blessing in disguise. No longer obligated to follow the leaders (and the huge galleries that come with) I ordered a Bloody Mary and followed Nick Watney and Padraig Harrington as they played the front nine.

If you ever get a chance, stand above the box on the 5th and watch the pros hit their tee shots. And just listen. The sound is magnificent. The crack of the club head echoes in the trees, and seems to linger as the ball flies to deepest corner of the track. At least it did when Watney pounded one down the middle.

Turn the corner and you are greeted by one of the coolest par 3’s you will ever see. The bunker in the middle of the green on number 6 is the feature everybody remembers, but it’s the tranquil, secluded feel that makes the hole special. It might be the most peaceful spot in Los Angeles. I watched Billy Hurley III chip one off the surface of the green and over that crazy bunker, and drained the rest of my Bloody Mary.

As my walk continued, I realized more than ever that Riviera’s charm is sewn around a quilt of unique, interesting holes. It starts on number 1 – an opening drive from an eagle’s perch. It's a layout epitomized by the famous 10th – a diabolical 315 yard par 4 - arguably the most difficult short hole in the game. And it’s all capped off perfectly by 18 - a daunting uphill climb tailored for dramatic finishes, which until this year, were a sure thing at Riviera. 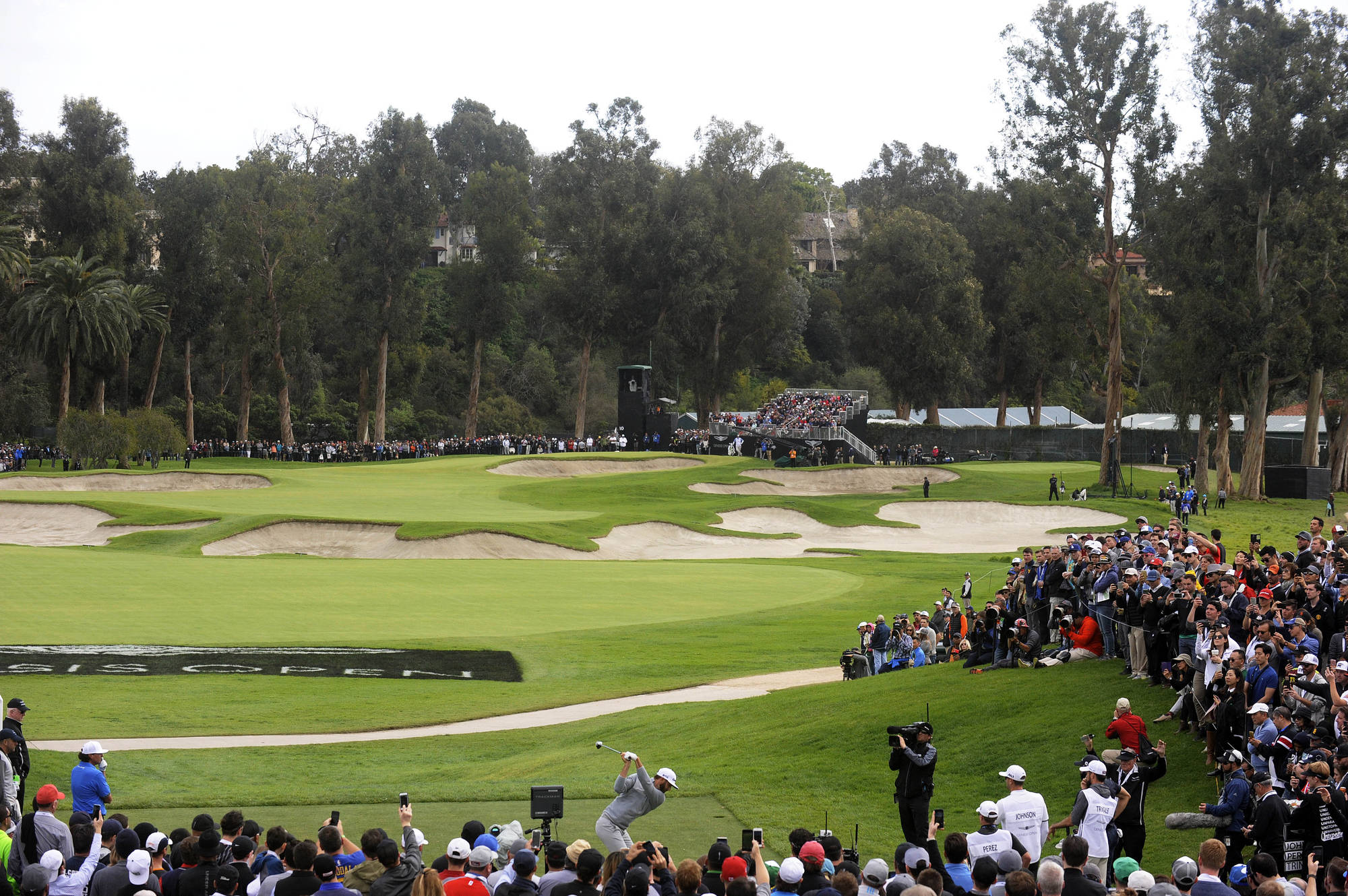 The 10th at Riviera – a diabolical 315 yard par 4 - arguably the most difficult short hole in the game.
Gary A. Vasquez-USA TODAY Sports

Speaking of that finish, it was the first time in 20 years that a player won the tournament by more than 3 strokes (Nick Faldo, 1997). As expected, DJ’s final nine holes were a walk in the park. By the end of his final round 71, he still had a 5 stroke cushion. It’s not that often that a player gets the best of Riviera, but it was clearly Johnson’s mastery of the course that separated him from the field.

As DJ cruised to victory, all eyes shifted to the race for 2nd. And there was still plenty to talk about. Jordan Spieth, who had probably the largest gallery outside of the leader, has yet to solve Riviera. He finished in a tie for 22nd. Justin Rose put up a decent fight, finishing in a tie for fourth, but still 6 shots back. Ollie Schniederjans made the best push among the rookies, with a 10-under par performance. Jason Day, however, did not fare so well, and Riviera once again got the best of him.

Riviera always seems to provide a good test for the PGA’s elite, and a fitting end to the West Coast Swing. It gives us a hint at who might emerge as a contender for the Masters, now just weeks away. However, it’s safe to say, this was not your typical LA/Northern Trust/Genesis Open. The challenges created by the weather and a 36-hole finish on Sunday zapped some of the theater we’ve come to expect. But perhaps we’ve been a little spoiled. Maybe this year, it was Riviera’s turn to shine. 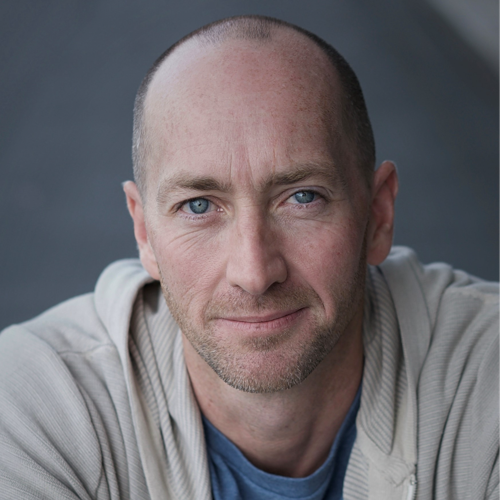 Not watching the WBC? You're missing out

Takeaways from Torrey: Inside the ropes at the …