Miguel Cotto Does Not Have The Skillset Required To Beat Canelo 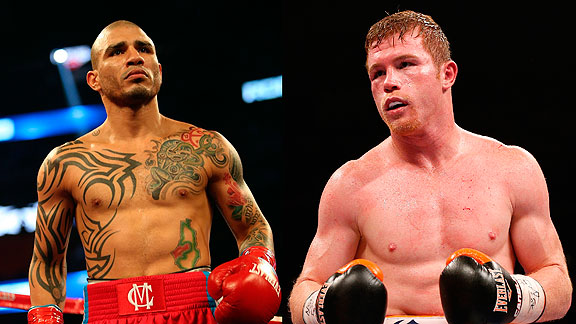 For the past 7 months the president of Golden Boy promotions Oscar De La Hoya has been on a mission to make the showdown between Miguel Cotto and Saul "Canelo" Alvarez happen this year. But up to this point Miguel Cotto has been reluctant to accept the fight. One may argue that Cotto has been reluctant to fight Canelo because Cotto knows that he does not have the required skill set to beat Canelo. In order to have success against Canelo his opponents have to put constant pressure on him during the first 1:30-2 minutes of a round since Canelo uses this time to regain the energy that he has lost in the previous round due to all the power punches thrown. His opponents put constant pressure on him by throwing their jab and secondary punch i.e. hook, uppercut or overhand. This forces Canelo to spend energy covering up as a result this will diminish the attack that he will put forth in the final minute of rounds which is started by his left jab and his right hand secondary punches i.e. hook, uppercut or overhand followed up by body shots.

During the final minute of rounds, his opponents have to constantly be on their bicycle that means evading his punches to make sure he doesn’t steal the round or seriously hurt them. Some aspects of this game plan don’t fit Miguel cotto’s fighting style as Cotto can put constant pressure on Canelo by throwing his left jab and secondary punch i.e. left or right hook. But where the problem lies for Cotto is that he doesn’t try to evade punches to make sure Canelo doesn’t steal the round or seriously hurt him. Instead Cotto likes to stand in the pocket and trade punches which is right up Canelo alley

Wide Receiver May Be The Most Dependent Positio…

The Emergence Of Odell Beckham May Lead The Gia…

Philadelphia Eagles May Win The NFC East In 201…

Unpacking all the Tyson Fury drama