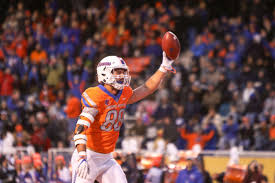 On September 22nd, Boise State suffered their worst home loss since 2001. The Broncos were embarrassed by Virginia which came by a score of 42-23. Most fans thought the season was ruined, and they weren't wrong to think that. This was a Mountain West team that lost 2 games before the month of September was even over, and their 2 other games were ugly wins over Troy and New Mexico. Once the first 4 games were out of the way, something seemed to click with this Bronco team.

It all started with a road test against rival BYU. The Cougars were 1-4 at the time, but this was still a very important game considering the fact that Boise hadn't won't a game in Provo since 2003. By the end of the game, all doubts were erased as the Broncos won soundly, 24-7. RB, Alexander Mattison, rushed for 100 yards for the first time of the season, while QB, Brett Rypien, threw his first TD pass of the year.

The real test was the following game. The Broncos were matched up with the 19th ranked San Diego State Aztecs, on the road. SDSU was undefeated at the time, and they were the front-runner for a New Years Six bowl game. Boise State saw the challenge, and easily took care of business. They jumped out to a 21-0 lead in the first half, and finished the game with a score of 31-14.

The next 3 games for Boise State were no problem. They beat Wyoming, Utah State, and Nevada with a combined score of 106-42. Brett Rypien grew more and more confident through these games, and he finally seemed to be playing like the all-conference QB that he was.

Next up was Colorado State, and this game was one for the ages. The Broncos overcame a 25-point deficit in the first half and a 14-point deficit with under 2 minutes left in the game to ultimately win 59-52 in OT. The game would have been a loss for Boise if it wasn't for an onside kick recovery by Cedrick Wilson which set up a game-tying TD drive. This was the 6th win in a row from the Broncos, which earned them their first spot in the CFP Rankings at number 25.

This past weekend, Boise State ended a 3-game losing streak to Air Force by beating them 44-19. They are currently 7-0 in the Mountain West, which seemed impossible after the slow start to the year. A New Years Six bowl is extremely unlikely, but the Broncos have still put together a season to remember.