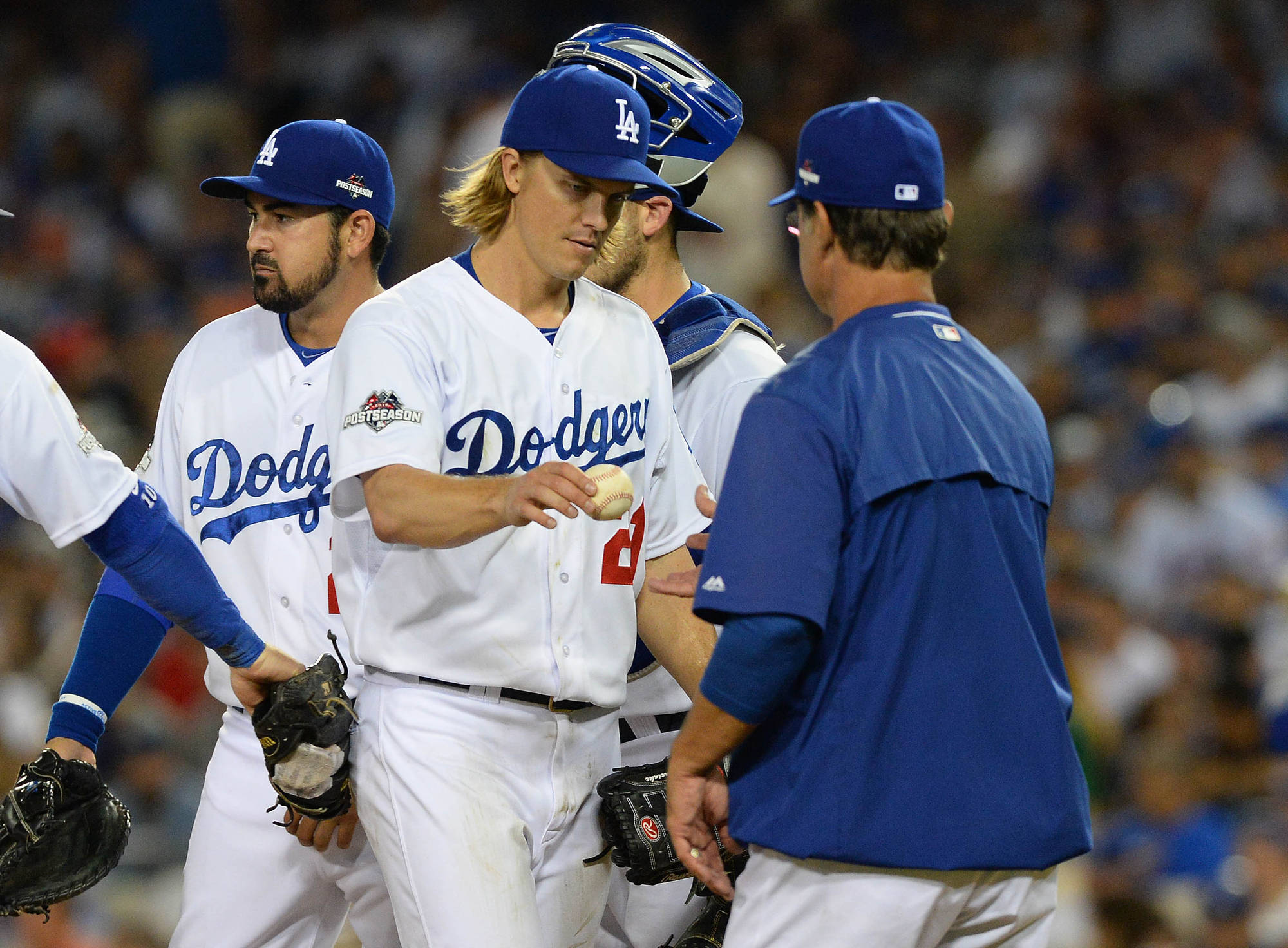 Zack Greinke hands the ball to Don Mattingly after allowing 3 earned runs in a winnable game for the Dodgers.
Jayne Kamin-Oncea-USA TODAY Sports

It has been a month since the Los Angeles Dodger's season ended, however it wasn't until this weekend that I had the courage to re-watch  the footage of what unfolded at Chavez Ravine on  October 15th. It was difficult seeing the many chances that the Dodgers had to extend their season and face a favorable matchup against the the Chicago Cubs in the NLCS. However, the Dodgers could not execute and once again found themselves unable to achieve the goal set by Clayton Kershaw in the offseason of "World Series or Bust." There are no morale victories as the people of Los Angeles will have to wait another year before they have the chance to witness a World Series appearance. As we continue to wait and see what moves the Dodgers will do to improve the roster, I will examine the key turning points of Game 5 the NLDS and how the Dodgers did not take advantage of open doors . 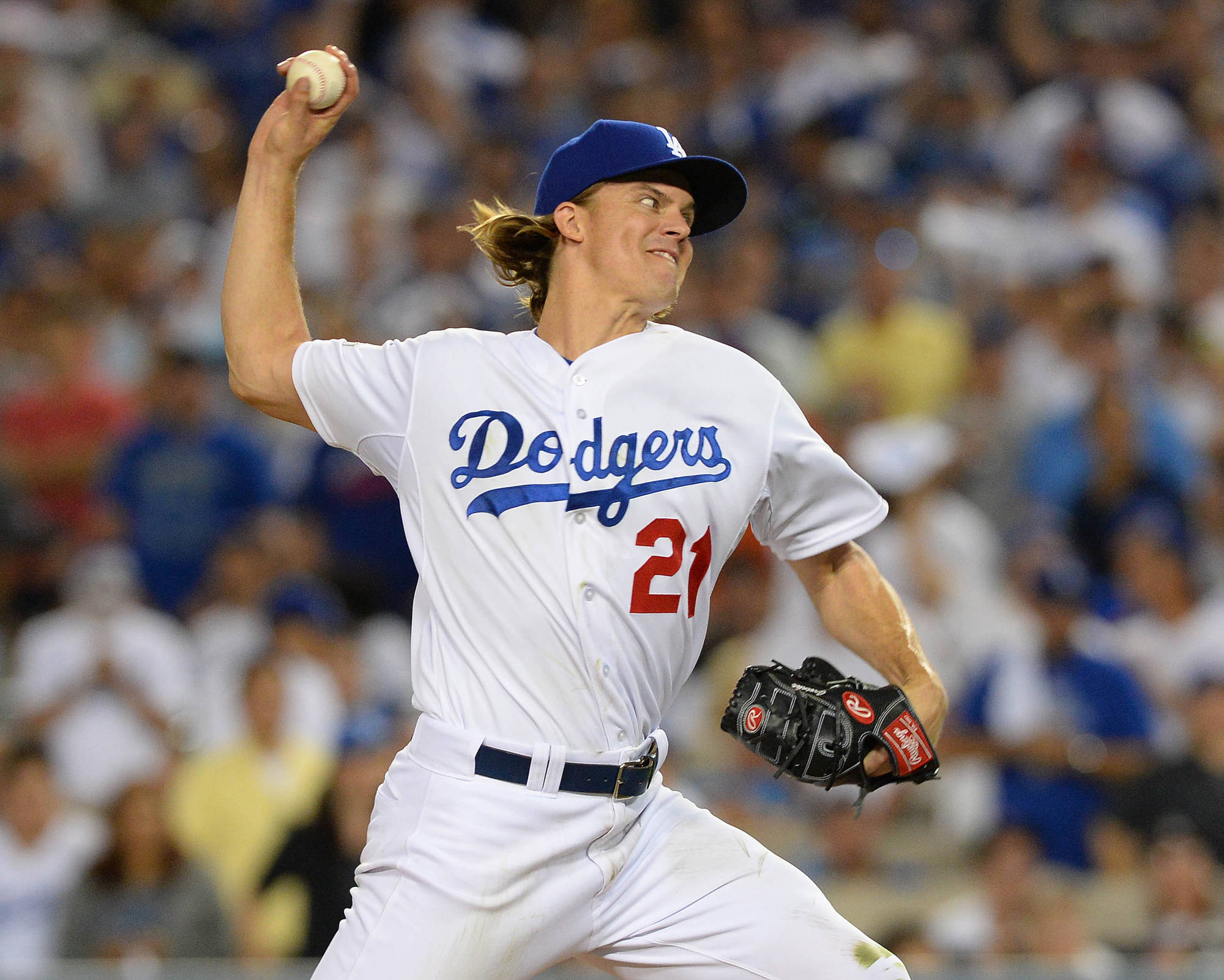 With a win or go home situation in play, the Dodgers had the luxury of turning to their ace, and finalist for the 2015 Cy Young winner, Zack Greinke on the mound to lead them into battle. Curtis Granderson led off the inning with an infield single that saw him hit into a shift and beat out the throw from Justin Turner. Responding with a man on first, Grienke immediately struck out David Wright not wasting anytime. Next was one of the hottest players in the playoffs, Daniel Murphy. Murphy hit the ball to left field where it dropped for what would have been a double, however after a misplay by Kike Hernandez and hustle from Murphy, he was able to extend the hit to a triple. The New York fans in attendance could be heard, as you could feel the importance of getting the first run across the plate. In fact, in the 3 losses that Greinke had in the regular season, he gave up 1 run in the first to the Rockies, Padres and Astros. As a fan, you felt that if he were to give up another run that inning, that it would be a mentally tough hurdle to come back from given the Dodgers woeful recent playoff history. Zack in true dominant form, struck out the next two batters to end the inning and limit the damage. 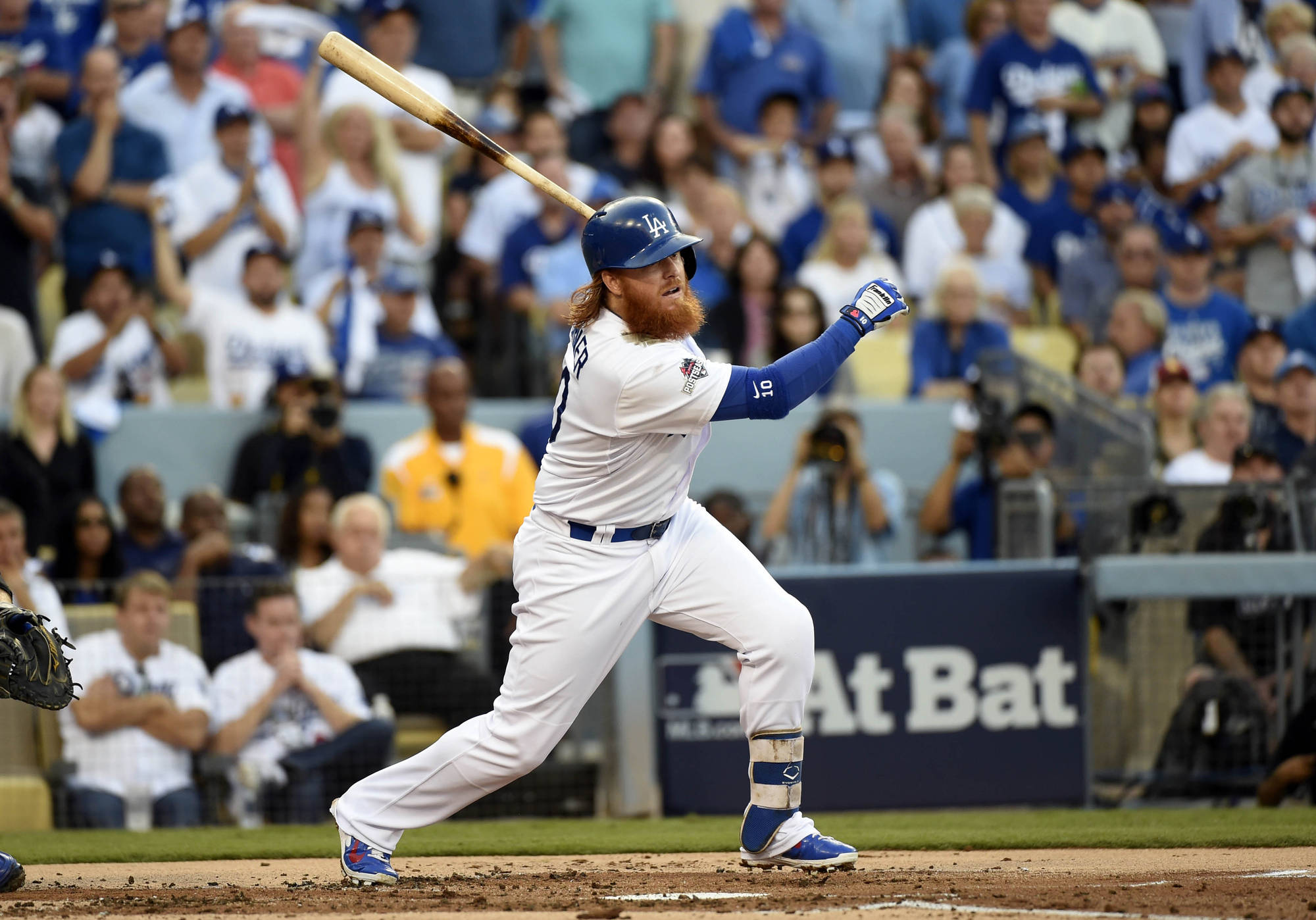 Shifting to the bottom of the 1st, the Dodgers looked to respond. Following back to back singles from Corey Seager and Adrian Gonzalez, Justin Turner, stepped into the batters box, looking to keep driving in runs. Jacob deGrom, the opposing pitcher for the New York Mets, seemed to have his command off, as the Dodgers hit two of his pitches sharply in the outfield. Turner made sure to continue to the trend as he singled to right to score Seager and tie the ball game up at 1 a piece. The Dodgers weren't finished. Andre Ethier continued the quick swinging bats and blooped a single into left field to score Gonzalez and move Turner to 2nd base. With only 1 out the Dodgers looked to go for the knockout as deGrom was on the ropes trying to settle down. Trying to extend the hitting streak to five in the inning, both Grandal and Kike struckout to end the first. This would be the last run scored for the Dodgers 2015 season. Missed Opportunity #1. 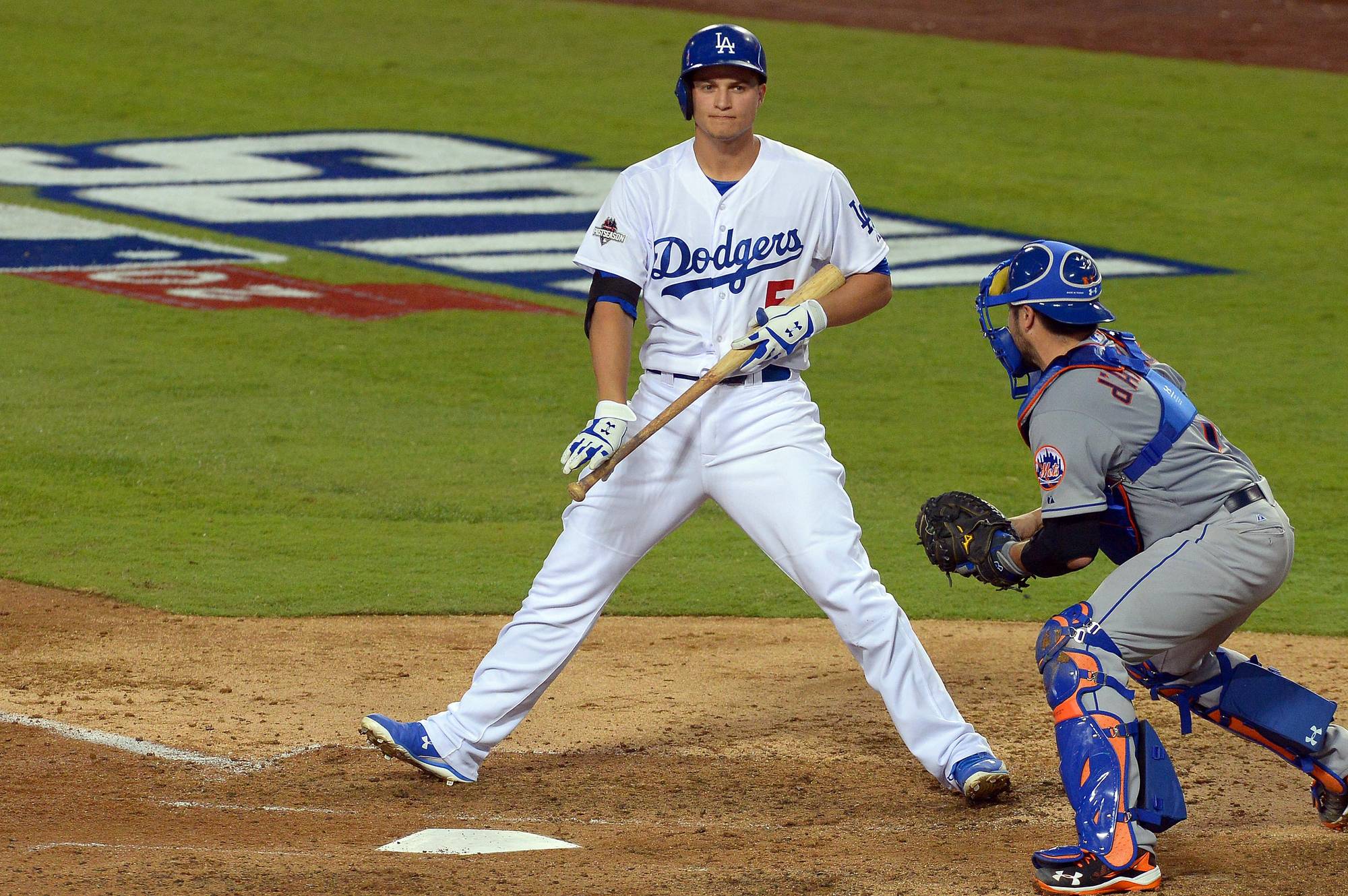 After Greinke made quick work with a 1-2-3 inning in the top half of the inning, the Dodgers had the opportunity to extend their lead and put the pressure on New York. DeGrom walked Joc Pederson as he still was struggling to find his command. After a sacrifice bunt from Greinke that moved Pederson over to 2nd, Howie Kendrick reached 1st base after a throwing error by SS Wilmer Flores, creating a golden scoring opportunity with runners on 1st and 3rd with 1 out. All the Dodgers needed was a ground ball or a long fly ball to score Pederson from 3rd. Given the situation worse case scenario, Dodgers tack on a run to give them a 3-1 cushion, best case scenario, Dodgers add multiple runs and knock deGrom out of the game. Up to bat in a key spot, Seager had the opportunity to start his Dodger immortality. The momentum was building as the Dodgers looked to take command of Game 5. Jacob deGrom had a different idea. He struck out the inexperienced Seager with a mix of fastballs and breaking balls, followed by a strikeout versus Gonzalez. Missed Opportunity #2.

After another dominant inning by Greinke, the Dodgers found themselves in another scoring opportunity. Already 2-2 in the game, Turner doubled to left to put the Dodgers in scoring position. The Dodgers again continued to apply the pressure to deGrom. With a golden opportunity to advance Turner, Ethier fouled to shallow left and had fiery exchange with Don Mattingly over the umpires strike zone. Having failed to move Turner over, Turner took matters into his own hands by stealing 3rd. With only 1 out in the inning, I was feeling good about the Dodgers chances of adding at least another run in the inning. Things got even dicier for deGrom as he walked Grandal to 1st. If deGrom would have been unable to get the next batter Kike Hernandez out, there is no doubt in my mind that Mets Manager Terry Collins would have taken him out of the game. Instead probably the biggest missed opportunity took place. Hernandez, who had a stellar year for the Dodgers batting .307, could not find a gap in the infield, grounding out into a double play to end the inning. This turned the tide in the game as deGrom was able to gain confidence that he could continue to find ways to get out of jams. Missed Opportunity #3.

Even with all the offensive miscues so far in the game, the Dodgers still maintained a 2-1 lead and Greinke showed no signs of surrendering any more runs. Then the most bizarre play of the night happened. With Murphy on 1st with 1 out in the inning, the Dodgers installed an infield shirt to the right hand sign versus Lucas Duda who has a tendency to hit the right side of the infield as a lefty hitter. After a tough at-bat, Greinke eventually walked him. As Murphy was trotting towards 2nd, he realized that there was no one covering 3rd as Turner was still in the shift on the right side and Seager was standing on 2nd base. The Dodgers inexcusably gave up a base that would cost them. The next batter Travis d'Arnaud hit a deep enough pop fly to right field to score Murphy from 3rd tying up the game 2-2. A breakdown in communication cost the Dodgers a run. Whether it was Grandal, Greinke, or Seager supposed to be covering 3rd, we may never find out. Missed Opportunity #4.

Even with a tie game, the Dodgers again had the chance to put more runs on the scoreboard in the bottom of the 4th. Pederson drew a walk, followed by a sacrifice bunt by Greinke. With a runner in scoring position, Howie popped out to straight center followed by another strikeout by Seager who seemed to be unable to perform when the game counted most. You wonder if Mattingly regretted not starting one of the veterans the Dodgers had acquired this past year in Jimmy Rollins or Chase Utley.  Missed Opportunity #5.

6th Inning - No One is Perfect

After a relatively uneventful 5th inning, Greinke ended up making the only mistake he made the rest of the night. With a full count and no one on base, Greinke threw a pitch that stayed in the strikezone allowing Murphy to blast a homerun and give the Mets a 3-2 lead. While I do not fault Greinke for challenging Murphy, given the situation with 1 out and no one on base, I'm sure Mattingly, Greinke, and Grandal are scratching their heads as to why they did not just let Murphy take 1st given his streaky hitting performance in the playoffs. While there was still 4 more innings to go, as a Dodger fan you just felt like it wasn't going to be your night. 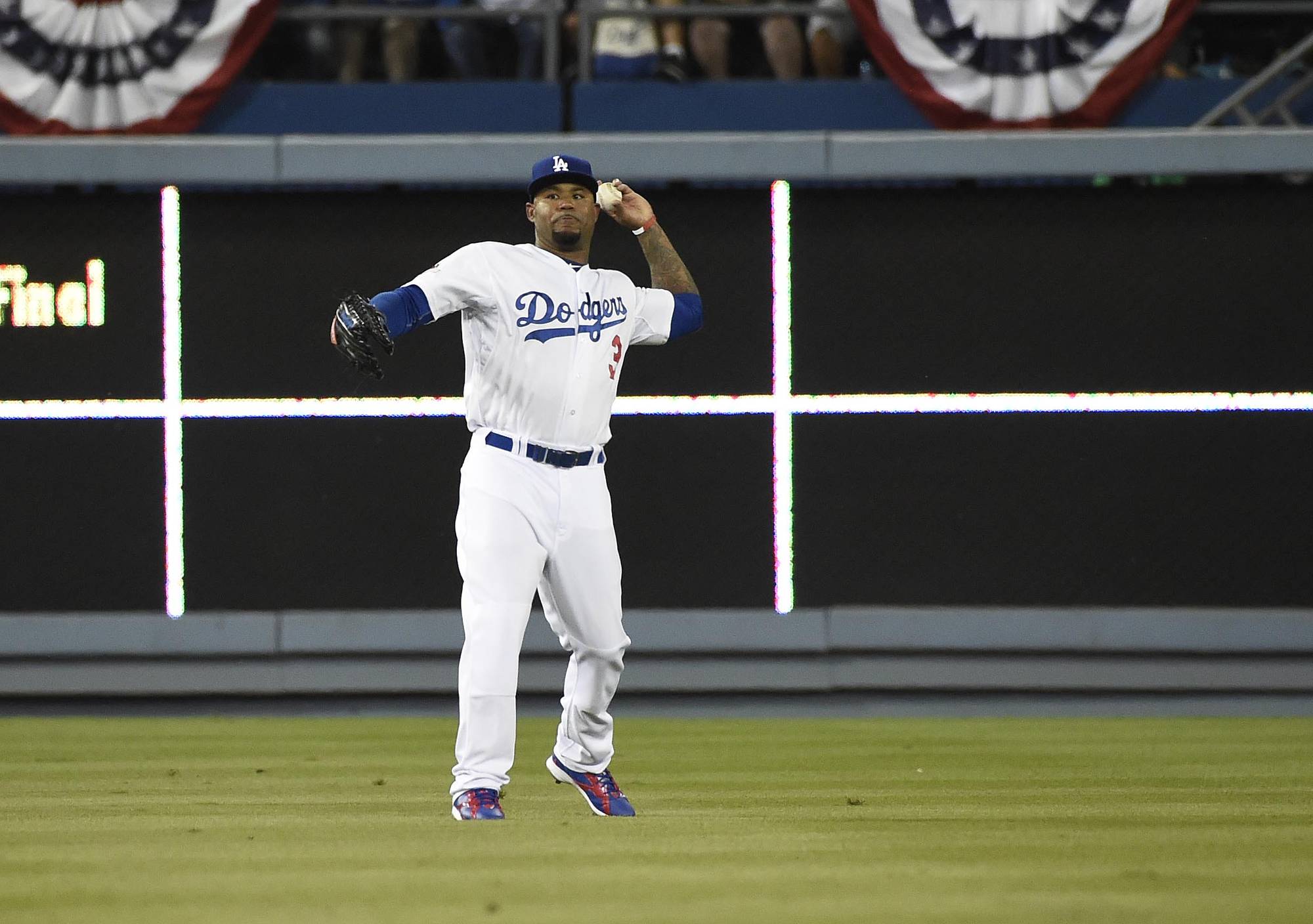 After having nothing go their way, Mattingly decided to pinch hit for Grandal in the 8th by bringing in Carl Crawford for a lefty-righty matchup versus Mets closer Jeurys Familia. Never mind that Crawford was batting a putrid .090 for the postseason. Mattingly decided to go with the match-up. The result was a fly out. Now I'm not a big fan of Yasiel Puig, however given his power, lack of scouting recently due to injury, and uncanny ability to put fear into opposing pitchers, I would have preferred to give him a chance instead of the unreliable Crawford. I won't count this as a missed opportunity just because the Dodgers were looking for anything to catch lightening in a bottle. Rollins ended up making a pinch hit appearance for Kike but like Crawford, he was unable to make anything happen.

Down to their last 3 outs of the season. The Dodgers left no stone unturned (except for Puig), bringing in Chase Utley to pinch hit for Pederson and lead off the bottom of the 9th. A bit too little, too late, Utley popped up to right followed by an AJ Ellis and Howie Kendrick strikeout to end the season. 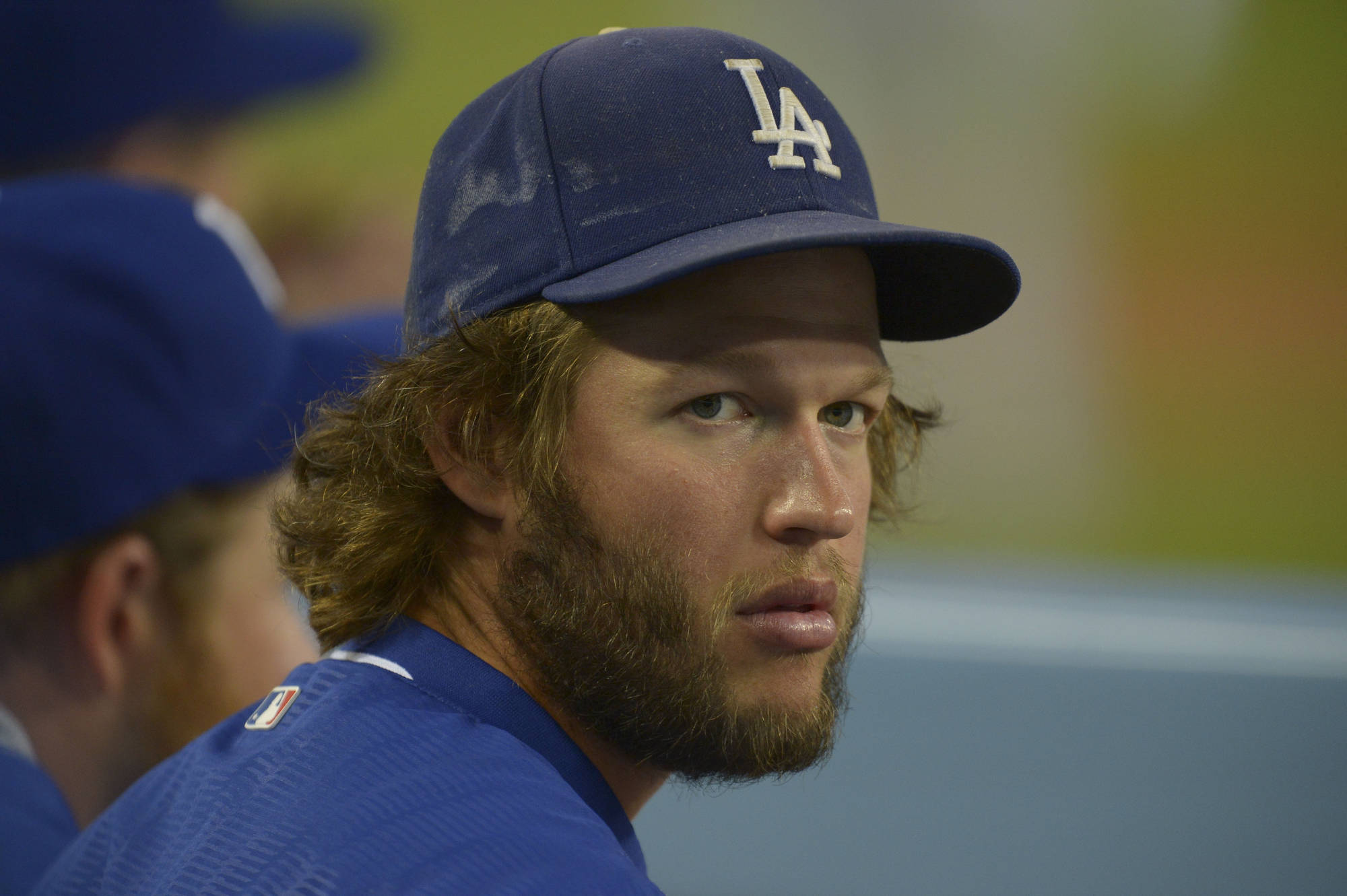 Once again the Dodgers are looking for answers as to what went wrong this postseason. Clayton Kershaw actually came through in the clutch setting up a perfect opportunity for Greinke and Dodgers to advance far into the postseason. It wasn't due to lack of luck as I counted 5 moments in the game that were there for the taking. While many have blamed Don Mattingly as the problem, he can no longer be a scapegoat after his firing. For the record, the only real impact he had that I can assign blame for Game 5 is not starting Rollins or Utley at SS going for a hot hitter in Seager. This game was lost by the players and there are going to be difficult decisions that the Dodgers front office is going to have to make in the off-season. As Kershaw stated before the season, it's the World Series or bust in Dodger land and given their exit in Game 5, you can mark 2015 as a failed season.

What Kobe Means to Me

The Gift of Jordan Clarkson