How do the Flyers fix their goaltending woes? 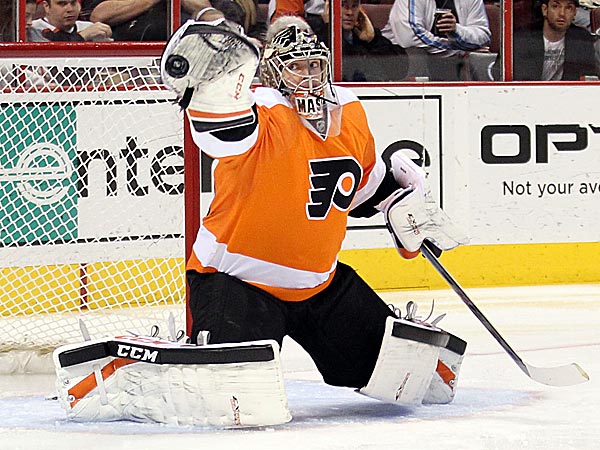 Who was the last superstar goaltender between the pipes for the Philadelphia Flyers?

Ilya Bryzgalov was a superstar with the Phoenix Coyotes, but did not live up to that hype in Philadelphia, giving up 37 goals in 11 playoff games. Bryzgalov's love of the universe became more noteworthy than his play in net.

Sergei Bobrovsky became a superstar, but only after the Flyers traded him to the Columbus Jackets in 2012. He became a future Vezina Trophy-winning goalie and started for Team Russia in the 2014 Winter Olympics and the 2016 World Cup of Hockey. Bobrovsky was 42-23-10 in two seasons with the Flyers. The potential was there, but the Flyers gave up on him too soon.

Really, the last superstar Flyers goaltender was Ron Hextall, who played in Philadelphia for 11 seasons and compiled a 2.91 goals-against average.

Since Hextall retired in 1999, the Flyers have failed to find consistency in net.

In 2016, that issue continues as Steve Mason and Michal Neuvirth have struggled in net. The duo has allowed an NHL-worst 58 goals and 3.63 goals per game. Neither has a save percentage above .880 or a goals-against average lower than 3.41.

The Flyers have allowed five or more goals in five games this season. It has led to a 7-7-2 start and a fifth place spot in the Metropolitan Division.

The scary thing is that the defense in front of Mason and Neuvirth has been solid. Philadelphia only allows 27.3 shots, fourth-best in the NHL.

Additionally, the Flyers are scoring plenty to give their goalies lots of cushion. Philadelphia leads the NHL with 17 power play goals and its 53 goals overall is second best.

So the pressure is on the netminders. Neuvirth may have an excuse; he left Saturday’s 3-2 win over the Minnesota Wild with a groin injury. He will be out 4-6 weeks, thus putting the pressure on Mason, who has five of the Flyers’ seven regulation losses.

For now, what’s the fix for the Flyers?

With Neuvirth out, the Flyers will call up Anthony Stolarz, but unless he surprises the NHL, he is not a long-term solution.

It’s time for another trade.

The market for goalies is hot. Jaroslav Halak seems discontent in New York, while the Tampa Bay Lightning and Pittsburgh Penguins both have two starting goalies on their respective rosters.

So, the Flyers potentially have five goaltending options to trade for. Halak might be the best option to go for. His agent, Allan Walsh, is unhappy with his client’s situation with the Islanders.

Chances are that Halak and Walsh believe that a trade is best for his future.

Why not Philadelphia? The Flyers know that there is some conflict in New York and can use that as leverage for the trade. With this logic, Philadelphia would not have to give up a lot to get Halak.

There is no doubting what Halak could do for Philadelphia. He has never posted a goals-against average above 2.86 in a full season. Though Halak’s goals-against is 3.00 this year, the Islanders moronic three goalie system likely has gotten to Halak’s head since he is typically the main starter.

With New York putting Halak on the trading block, it’s only a matter of time before he gets traded. The Flyers need to seize this opportunity to shore up their goaltending issues.

Despite loss, Steelers have good news

Which sports franchises need to relocate?