Brady, balls, and bias - Tom Brady's suspension and a reflection on competitive advantage and treatment of athletes in sports 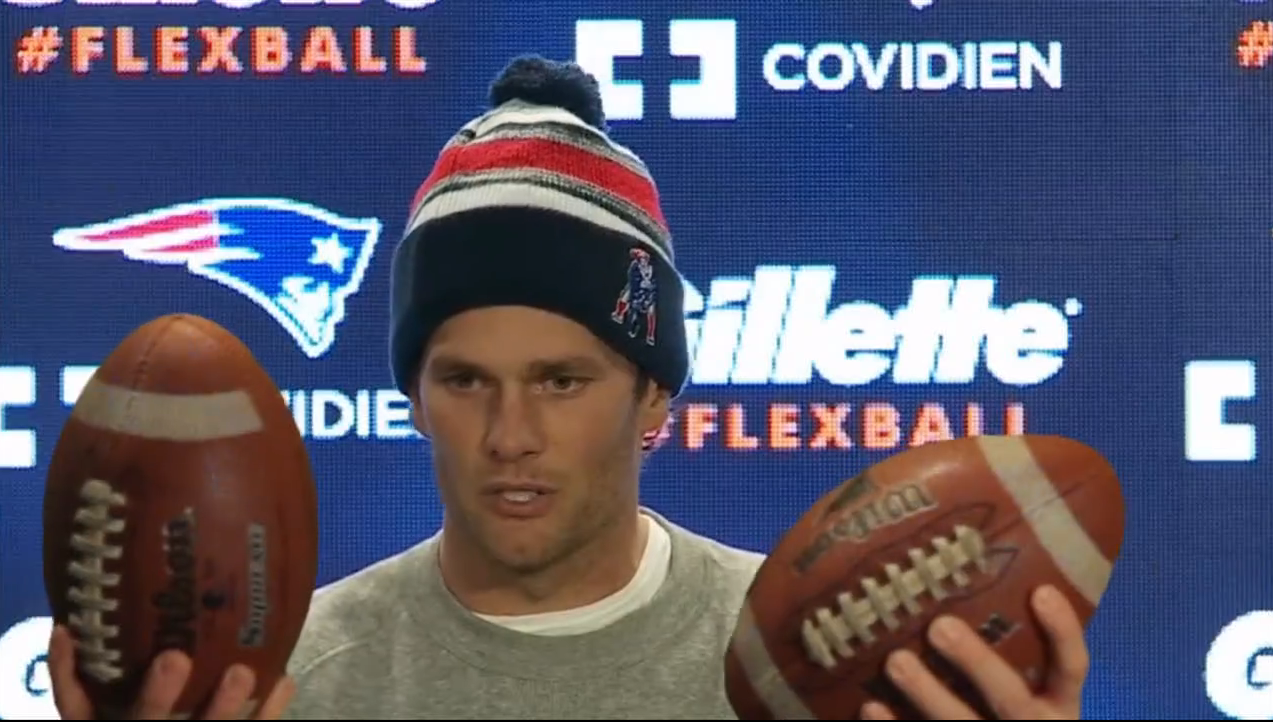 One thing we can all be thankful for is that nobody told Tom to use the word "footballs" during the press conference.
Tom Brady got suspended 4 games (25%) of the upcoming NFL regular season for being “more probably than not” “generally aware” of the scheme to deflate footballs in at least the games against the Colts last season. Those are the words of the official NFL-sanctioned Wells report which investigated the matter and published a 240-page document.

In addition to Brady's suspension, the Patriots will lose two draft picks, be fined a million dollars and may face additional suspensions for two members of their equipment staff, one of whom, is the famously-nicknamed “deflator”. An appeal is expected by the players' association.

For those catching up to the story, after getting blown out in a playoff game against the Patriots, the Indianapolis Colts claimed that once they got their hands on one of the footballs that the New England offense was using, they realized it had been deflated below the stipulations in the rulebook.

Since then, Brady has denied any knowledge of any wrongdoing as far as the balls are concerned in one of the most hilarious press conferences in recent months. The investigation confirmed what everybody had already known – that Brady was lying his ass off.

With an uncomfortable smirk on his face he told us that there was nothing wrong with his balls and that some guys like their balls harder and some like them softer.

The perfect punishment for this infraction was a 1 game suspension for the Superbowl. But it is somewhat understandable that the league couldn't (or didn't want to, fearing an even bigger media circus) conduct the investigation in time for the big game. All things considering, I thought Brady should have gotten more – 8 to 16 games – half, or even the entire season.

I should point out that I am generally against strict, prolonged punishments. My first premise here is that the main point of punishment is the shielding of society from a particular behavior and its deterring factor which we hope improves our society by discouraging the behavior in the minds of other people. As illustrated by many factors, primarily recidivism rates, harsh punishments however, demonstratively, don't work. So while usually staying away from the punishment-hungry mobs, I am glad that the NFL came down on Brady at least this much, and I think it could have come after him harder. Considering the above assessment of the purpose of punishment the Superbowl suspension would have been perfect. Tom Brady would never tamper with footballs again had he been denied the opportunity to play in that Superbowl.

Everyone aims to be objective when approaching these topics, but sometimes you find yourself involuntary thinkin ”man, I'm glad they finally got'im.” Because it truly seems like he and his partner-in-crime coach have been toying with the NFL and the rest of us for some time with gates and controversies never seeming to escape the pair of footballing masterminds. But you aren't supposed to think this way...

A large percentage of reasonable personalities have voiced an opinion that the career of an all-time great quarterback should not be tainted by the NFL because of an arguably insignificant violation. People have also compared this violation to a couple of infractions in the past. I'll review those arguments in more detail, but when it's all said and done, a whole lot of people think that we should leave 'golden boy' alone because this simply isn't a big deal.

At that point I started wondering, why I don't feel the same way. It's the ball, damn it! It is a big deal. I started reaching the conclusion that those opinions were subject to two forms of bias – one originated from a lack of an athletic background, the other from the affection for Brady.

Which brings me to the issue of bias. I separate bias into two types – let's call them inherent and acquired. I'd describe my support of the Bulls to be affected by inherent bias stemming from my upbringing in Chicago, familiarity with the players, city, arena, team philosophy, etc – the home town team story. My bias for FC Barcelona, however, is different – it is an acquired bias. At some point, I was objective and had even chances of becoming a Madrid fan, as I did a Barca fan. And I became a Barca fan for a reason, by choice. I consider my opinions about Barca to be less subjective than about Chicago teams because my Barca bias comes from a healthier place. My own empirically acquired set of information now guiding my actions and opinions.

I am inherently prone to be attracted to, and biased toward the Tom Brady story. The overlooked 6th round draft pick fighting his way to the top as soon as he was given a chance. Does it his way, with fierceness, leadership, courage, and charisma. Moreover, I'm prone to dislike and not root for the rich kid, who grew up in the perfect family, has been recruited since diapers, gets drafted number one, and maintains a squeaky clean image. But somehow I am a Manning fan. I feel comfortable making these judgments on Brady's infraction because I am evaluating him on his behavior throughout his career which has led me to believe this and not anything else. And I must say I take a bit of pleasure as I witness him having to say:

that he chooses the balls he wants by feeling on them and feeling the lace on them.

Tom Brady, and anyone who has ever played a sport involving a ball seriously knows how important it is. Playing with a Spalding is just significantly different than a Wilson – it just is. And that matters, which Brady was fully aware of. I, like many others, only found out that teams can bring their own balls to the game, during this scandal, and find that rule as ridiculous as those saying that there is no standard size of a soccer pitch. The surface you play on and the only piece of equipment everyone shares matter. Especially in cold weather - Tom Brady's staple! How many times have we heard the argument that Brady's better than Manning because of their bad weather performance? Tom knew those footballs mattered.

And that's the point folks – to him those balls were perfect. And that's why he did it. I've heard Brady's deflategate being analogized to a pitcher scuffing baseballs and suggestions made that his punishment should be equivalent to those, relatively insignificant suspensions handed out to those pitchers. But the difference is that scuffing baseballs undoubtedly has a lesser impact on an MLB season than what Brady did, does on his season. The cliché says that hitting a major league pitch is already the hardest thing to do in sports. Hitting a scuffed one just makes it that tiny bit harder. Moreover, the impact on the 162 game baseball season, in which the given pitcher is only a part of a starting rotation or bullpen is minute. Thus a shorter suspension for those pitchers is understandable.

Another case to which this situation has been compared is the Vikings vs Panthers game which took place in such cold that both teams placed footballs in close proximity to heaters to warm them up making them easier to use, for which there was no punishment – only a warning. Those making those comparisons forget one crucial factor when assessing any sort of wrongdoing – intent. First of all, both teams committed the deed thus significantly affecting the conversation about unfair competitive advantage. I think a more accurate analogy would be a tennis player who would be able to adjust his string tension whereas the tension of his competitors would be limited within a certain range. Secondly, they did it overtly. Heating the rock solid football seemed like a genius idea to somebody on the sideline so without hesitation they started doing so, in front of everyone, out in the open. The lack of efforts to conceal shows the lack of malicious intent. Brady's operation involved a very clear understanding of the breaking of the rules, which he inadvertently admitted in the press conference:

At some point you gotta zip those balls up and stop messing with them.

Tom Brady is an actually exceptional athlete, a master of his craft, yet he exchanged sponsored items with locker room guys on the down low for them to do shady business with footballs during an NFL playoff game. All in order to allow himself the maximum level of the competitive sports perfectionism which makes him successful. Our demands of top level athletes makes them commit such actions along with their innate drive for the feeling of athletic superiority. But the bottom line is that he wanted a ball that's easier to throw, catch, and hold on to and that matters.

Let's just hope that the deterring factor of punishing will work just once and from this point forward... players will just leave their balls alone.

Unmitigated greatness is back - Barca win a sec…

Barca must break bank for Pogba now. A look at …