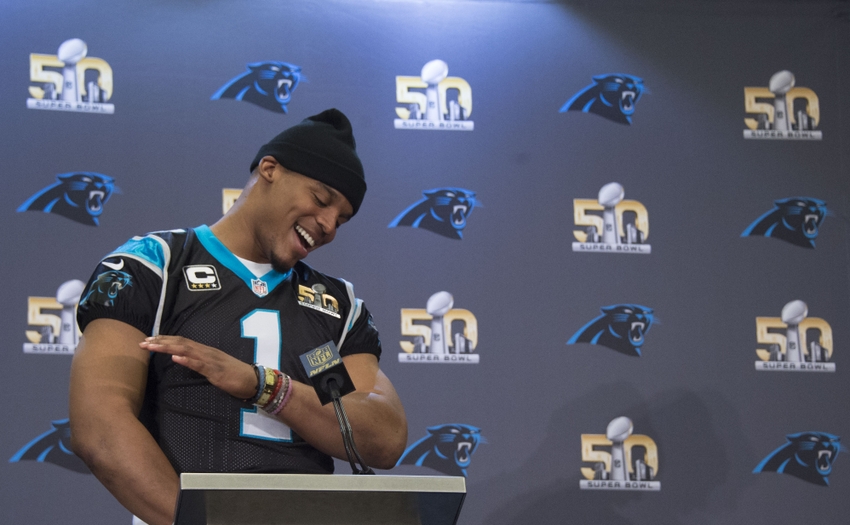 Cam is usually all smiles during his press conference. In a moment of defeat and frustration, he walked out of the post-Superbowl one sparking a wave of criticism.

Cam Newton doesn't owe you anything. You may think that he does, because at the end of the day, it is the fans approval that ultimately allows any professional sports league to flourish. But, more and more athletes are willing to be more brave with displaying their personalities relying on their sheer talent to be enough to earn them a perpetual spot on a squad or even lucrative endorsement deals. Professional sports in America enjoy such huge popularity they often seem impervious to financial problems.

The NFL remains king of the American sports landscape in spite of damning evidence that football kills people. The game will remain popular regardless of shameful behavior of its members, as indicated by the recent evidence that controversies not only fail to hinder the NFL popularity, they may actually work to increase it. In 2014 the NFL made $12 billion, a 14.3% increase from the previous year. The fact that Cam is comfortable enough and self-aware enough to admit that this league will be great with or without him is refreshing and confident, but it isn't narcissistic or self-involved. His post-Superbowl behavior was undoubtedly flawed - surely, it would have been better for everyone involved if he had sat there and faced the music.

But Cam is who he is. He is so confident and so comfortable in his own skin that I am truly convinced that it is actually hard to relate to for an outsider – a so-called “normal person”. He knows he's a sore loser. "Show me a good loser and I'll show you a loser" - he said. He felt he didn't need to sit there, adjecent to a Broncos player who happily kept repeating how their plan was to make them throw because they felt throwing was the Panthers weakness. This sort of confidence is necessary to become a great athlete. Considering it is truly hard to find a successful athlete who didn't believe in his abilities we can take that statement as fact. And if that's so, then we must recognize that an answer to an interview question that does not project confidence, but instead projects modesty – is, at least partly, dishonest. An average fan, especially in America, the place most relevant for this discussion, not only accepts the above notion, but, as evidenced by the uproar over Cam's behavior this season, encourages it and often angrily demands it.

Why?! I scream. Why?! Why would you prefer Russel Wilson to Cam Newton? Why do we need time after retirement to realize that Randy Moss was just as awesome as Jerry Rice and we didn't need to fear him and criticize him for being himself? Why are we satisfied with answers to questions that are made up of strings of useless cliches, given by almost every QB in the league, but we don't embrace a Josh Norman who when asked about O'dell Beckham and his behavior during his matchup says “F*ck him and his whole setup”? Because even if you don't condone profanity and even if you don't condone pretending to moon the fans as a celebration, or even if you think that dabbing in the end zone may be a little disrespectful to opponents, you may merely appreciate... authenticity.

When Peyton did his post game interview on the field (after Cam gracefully congratulated him on his victory by the way) he kissed Popa John and pitched Budweiser. That's what we want. I've been a Peyton fan for a very long time, but the facts are what they are. Possibly the least deserving Superbowl winner, surrounded by accusations of HGH use, in possibly his last interview of the sort, when he could have said anything he wanted and been as open with the rest of the world as he wanted, he pitched a corporate sponsor. Do we really believe that after a grueling season, a man who's been making over $20 million a year for a large portion of his career is going home to drink that piss?

Marshawn Lynch's silence in press conference has more content and is more interesting than the typical quarterback interview full of the “we wanted to be aggressive and follow the game plan” nonsense. Or another one of my favorites: "our team just wanted it more." Right, that other team full of professional, alpha male, ultra competitive athletes thought to themselves "meh, fuck it, let's just let them have this one." In his silence Lunch projects a personality. One easy to criticise, but a real one nonetheless. His silence is more interesting, it makes me more curious about why he is the way he is, as opposed to a proper interview but one filled with cliches? Why do we want our athletes to be boring, as opposed to authentic?

LeBron James has been recently criticized for not taking a public stance on racially motivated police brutality affecting his community and the rest of the country, particularly after the shooting of Tamir Rice, a 12 year old playing with a toy gun in a park. This criticism stems from James' business decision to stay out of the conversation in order not to upset people, who may or may not become consumers of his brand. Thus, we, society, force an athlete into a situation in which he must choose between being genuine and being marketable. Following the old Jordan mantra of “Republicans buy sneakers too.”

Not Cam, though. He doesn't need everybody's approval to have the 2nd highest endorsement earnings in the NFL (behind Peyton Manning, of course) because those that do approve him are a strong enough contingent to allow him to express himself. He won enough of us over to be able to balance success and authenticity. Because he's that good and because he's that real. That adorable smile certainly helps as well.

In a culture where people rush to fulfill their nine to five work schedules, in their black dress shoes, with white Apple headphones, and while reading 50 Shades of Gray, or strolling through a newsfeed of social media updates, conformity is an expectation. And in a league, guided by “the shield”, protected by a mask, and while believing Pacino that you survive as a team and or die as individuals, a man who smiles, dances, interacts with the fans, and answers questions however he wants to is a true rarity. And in my humble opinion – one to behold.

Leicester City - this is why we watch