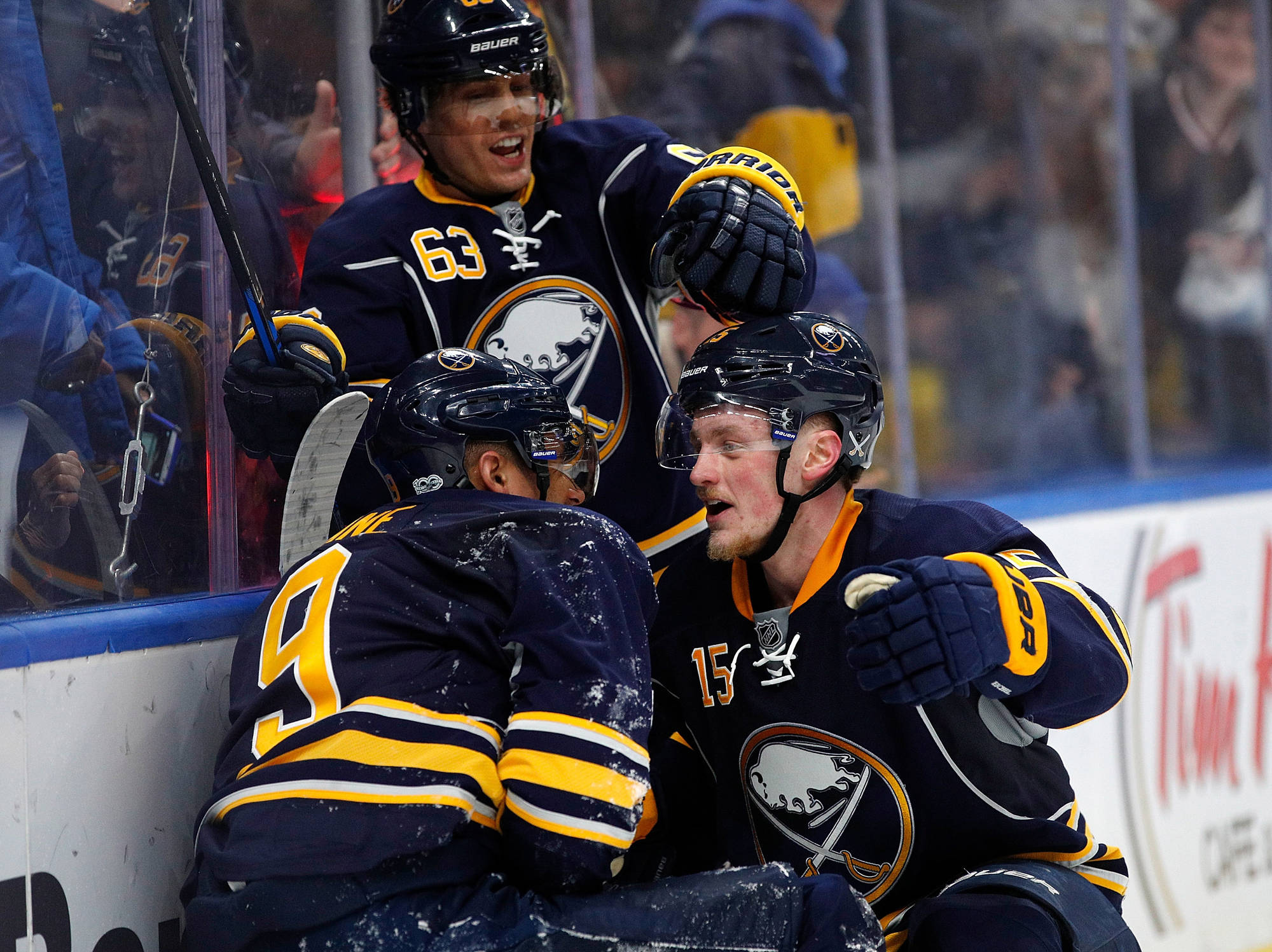 The Buffalo Sabres can be tantalizing and terrible, and they were both Tuesday in a wild 5-4 overtime victory over the San Jose Sharks in KeyBank Center. Buffalo stormed back from a 4-1 deficit in the third period when Ryan O’Reilly, Evander Kane and Kyle Okposo scored in a 3½-minute stretch to extend the game. Kane scored in overtime off a perfect feed from Jack Eichel before barreling into the boards.

It is a great sign that the Sabres pulled off a remarkable comeback against a team that were in the Stanley Cup Finals in 2016.  It was the first comeback when trailing by three goals in the final 12 minutes for the first time since Nov. 6, 2006, against Boston. They never quit and showed the character and competitiveness of a team going in the right direction. Now they need to build off that effort and start stacking wins. Too often over the past two seasons, they looked ready to sprint up the standings before falling on their faces.

Buffalo showed signs of a breakthrough last week when it dominated Ottawa in a 4-0 victory. Right when you thought the Sabres would forge ahead, they tripped over their own feet in New Jersey. They were stumbling around Tuesday, too, before collecting themselves and beating one of the NHL's best teams. Oddly, the Sabres are 24-6-2 with four ties, including 17-1-1 at home, all-time against the Sharks.

Currently, the Sabres are on pace for 83 points, two more than they had last season. Was it reasonable to assume that the Sabres could trust Okposo and Dmitry Kulikov to lift a young, developing team into the postseason?

Jack Eichel’s injury before the opener didn’t help matters, of course, but people were kidding themselves if they believed his return would solve their problems. Buffalo was two games under .500 without him this season. They’re three games over .500 with him in the lineup. One man can only do so much.

Some believe that the problem with the Sabres tanking for the first or second pick overall in 2015 was that too much emphasis was placed on a single player being a savior. The Sabres could have traded the pick to Pittsburgh for Evgeni Malkin or Sidney Crosby, and they still would have been miles away from becoming a playoff team.

Eichel has 12 goals and 25 points in 32 games, including two assists Tuesday, putting him on pace for 32 goals and 64 points over an entire season. He’s the Sabres’ best offensive player. But he also failed to score in 24 of 32 games and does not have a point in more than half of his contests. At 20, he’s a young player searching for consistency.

It’s impossible to say when everything will come together. The Sabres haven’t had a five-game winning streak since 2012. It’s hard to fathom in professional sports today. Look at the Miami Heat. They were 11-30 at season’s midpoint before rattling off 11 straight victories.

The Sabres are a year or two away from contending for the playoffs, assuming Tim Murray makes the right personnel decisions. In the meantime, you can look for indications they’re getting close to the postseason. You’ll know the Sabres have a playoff team when …

* Their best players perform at a big-time level. O’Reilly has 12 goals while collecting $11 million this season. He’s the first to say he needs to be more productive, and he’s right. Matt Moulson, who was on the fourth line and also scored Tuesday, has 11.

Rasmus Ristolainen hasn’t scored in 22 games. Sharks defenseman Brett Burns would lead Buffalo in scoring on assists alone. He had two assists Tuesday, giving him 57 points in 54 games. The Sabres haven’t had any player average a point per game since Derek Roy in 2007-08.

* Players stop making excuses while trying to sound like they’re not making excuses. If it’s not injuries, it’s the officials or puck luck or some other external force working against them. It’s the mark of a fragile team that rationalizes failure rather than overcoming adversity … like they did Tuesday.

Robin Lehner had the honors after a 2-1 loss Monday in which the Devils scored two power-play goals. “We didn’t get the calls today,” Lehner said, “not that that was an excuse because I think we played a poor game.”

* Players stop discreetly whining about the coach. Believe me, players have ways of getting their message across behind the scenes. Sometimes, they have a point. Usually, when they start moaning about the coach or style of play, it’s an attempt to disguise their collective shortcomings.

Bylsma didn’t fail to pick up Logan Couture in the first period when the Sharks winger picked up a rebound for a 2-1 lead. Eichel did. Bylsma wasn’t grossly out of position when Melker Karlsson walked untouched into the slot. That would be Jake McCabe. Bylsma didn’t fumble a pass to Okposo for a partial breakaway in the third period. O’Reilly did.

* Payroll matches production, particularly along the blue line. Too many defensemen are making too much money and not helping their team enough. Four of their five highest-paid D-men have failed to provide value even when they’re healthy: Kulikov, Zack Bogosian, Josh Gorges and Cody Franson.

And that’s the point.

The Buffalo Sabres are not Cup contenders and will need to build off the success of this season. Reinhart is a solid player, but he’s not a top-six forward on an NHL heavyweight. It’s not a crime. If he played on the third line, it would indicate the Sabres added talent and placed him into a slot more suited for him. The same goes for Marcus Foligno.

Remember when the Sabres were contenders? Derek Roy and Thomas Vanek were on the third line, causing matchup problems. Both had a tougher time when thrust onto the No. 1 line because they were forced to play against skilled defensive forwards and shutdown defense pairings. That was a decade ago.