Buffalo Sabres: The final push to secure a playoff spot 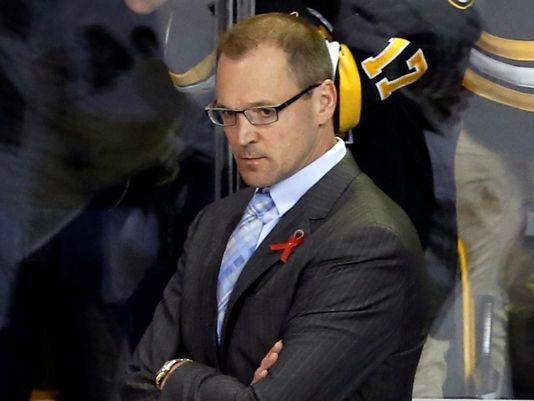 Dan Byslma ready for the final push towards the playoffs..

The Sabres' bye week ends Friday as the players reconvene for practice at 4 p.m. Mountain Time (6 p.m. Eastern) in the University of Denver's Joy Burns Rink.

You would expect coach Dan Bylsma to have one of his longest practices of the season, perhaps even pushing the 90-minute range, to help his players try to work off some of the rust they may have accumulated since Sunday's loss to Chicago. Between the bye and their heavy schedule of games, the Sabres have had just one practice in the last 10 days.

They will then have a morning skate Saturday in Pepsi Center before meeting the Colorado Avalanche here Saturday night (10 p.m. Eastern). But don't for a second think a game against the woeful Avalanche is a gimme: NHL teams are just 4-12-4 in their first game coming off the bye this season.

And with only 22 games left, the Sabres need every point. They're 26-24-10 for 62 points in 60 games are six pointsof both the final wild-card slot (New York Islanders) and third place in the Atlantic Division (Toronto). They are even in games played with both of those teams. Here's how others in those races have fared while the Sabres have been idle:

---Toronto (68 points, 60 games played): Went 1-0-1, beating Winnipeg in overtime and losing to the New York Rangers in a shootout -- to fall to an NHL-worst 1-7 in the skills competition. Remember that if the Leafs miss the playoffs by a point or two.

---Florida (66 points, 59 GP): Went 1-1, beating St. Louis to complete the first 5-0 road trip in franchise history but then returned home to lose to Edmonton. The Panthers host Calgary Friday night, and are 8-2 in their last 10.

--Philadelphia (63 points, 60 GP): Went 0-1,  losing Wednesday to Washington. They have their Stadium Series showdown with the Penguins Saturday night in Pittsburgh's Heinz Field and are just 3-6-1 in their last 10.

---Have pulled away: Despite going just 2-7-1 in its  last 10, Montreal still leads the Atlantic with 72 points in 61 games. Upstart Ottawa (70 points, 58 GP) seems like the division favorite at this point and can pull even with a win Friday night at Carolina.

---The also-rans: New Jersey (60 points, 60 GP), Detroit (58 points, 60 GP) and Carolina (56 points, 56 GP) all seem like they're heading south although the Hurricanes have enough games in hand to form some crazy winning streak. That said, they've already started selling with Thursday's trade of defenseman Ron Hainsey to Pittsburgh.