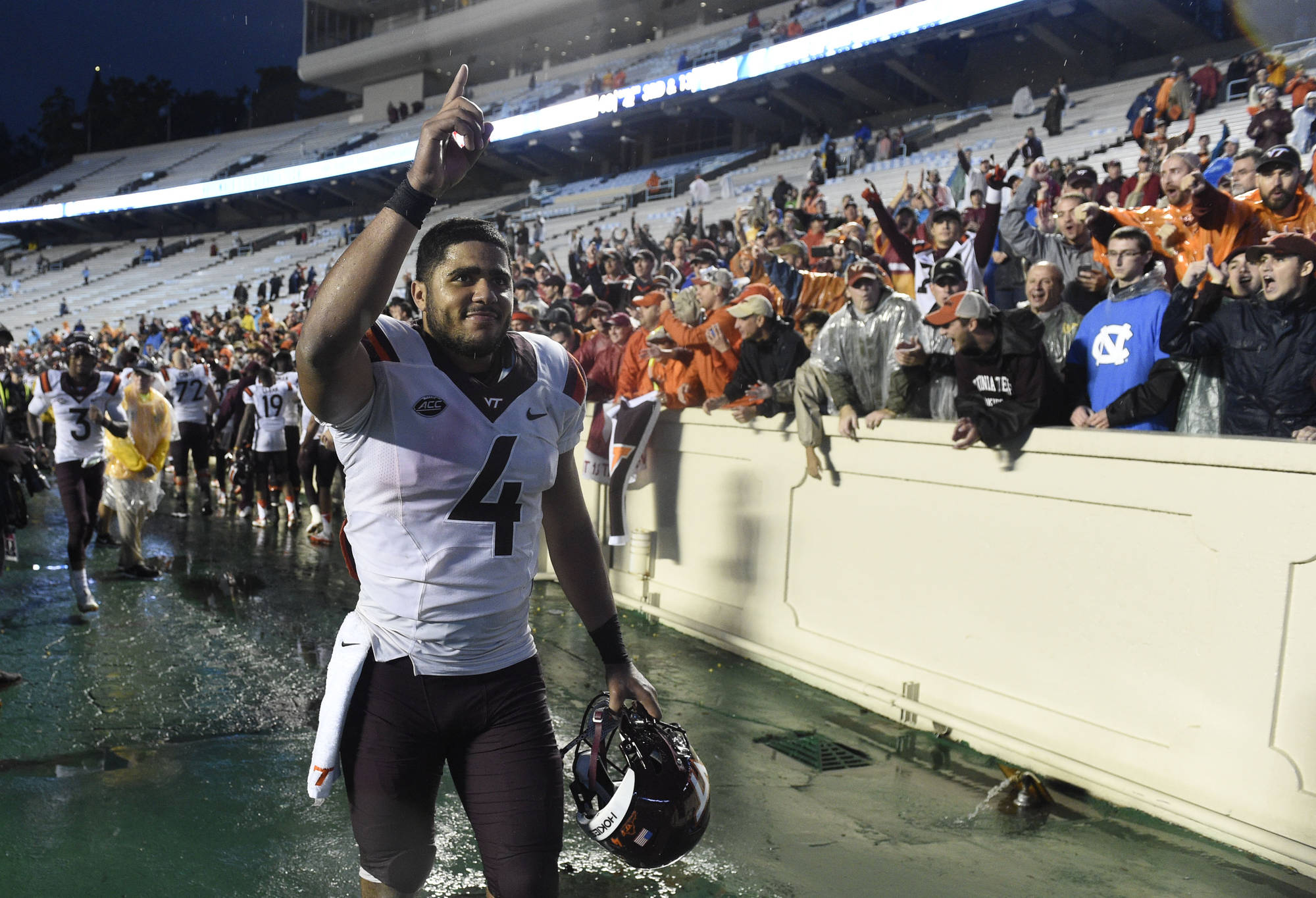 Needless to say, I have hit the "knee jerk" reaction bit a few times over my life, especially when I talk about sports.  It's a natural habit of mine.

Anyway, as the college season has progressed, there are certain stories that hasn't really gone about merely because of the likes of the major ones such as "can Alabama repeat and do it undefeated?" or "Can Lamar Jackson keep doing what he's doing in Louisville" or "Tennessee finding ways to win."  One story is Virginia Tech and their rise back to glory.

So why has it gone unnoticed?  For one, the ACC has been known as a 3-team race since really the beginning of the season with Clemson, Florida State, and Louisville while the ACC Coastal has been known as the "weaker" conference though many pointed at North Carolina and Miami leading the way.  Another reason is, we really haven't seen the Hokies make a lot of headway to the rest of the nation save for their win over Ohio State in 2014 early on (nearly taking them out of the playoff).  And finally, the Hokies had struggled for a while, despite continuing to make bowl games. 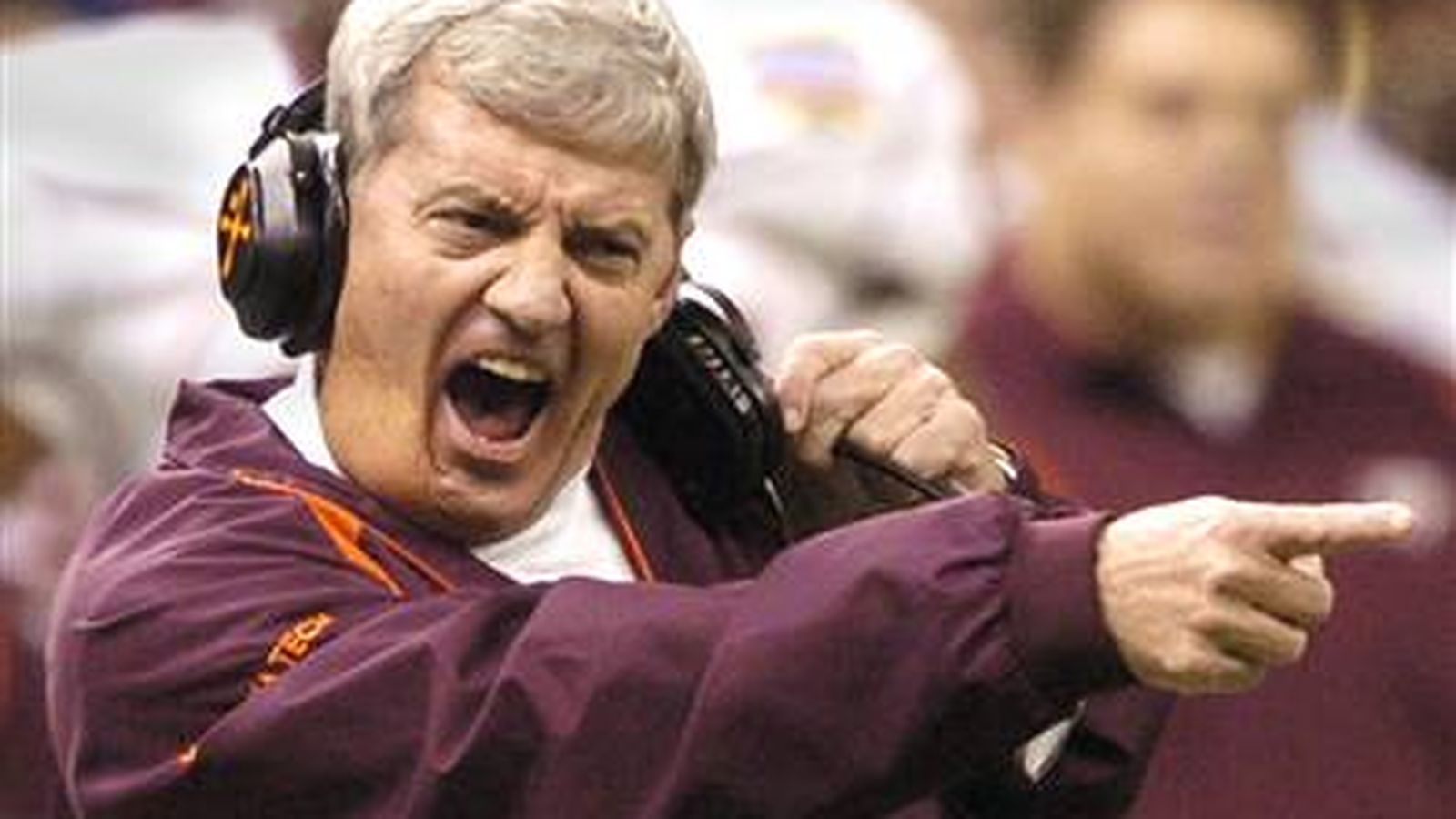 Beamer is the face of Virginia Tech football and always will be.

When I first started REALLY getting into college football, around my high school time, I had a good friend who was from Virginia and was a giant Hokies fan.  He wore VT gear pretty much all the time.  I didn't know a whole lot about it, but then started to see the Hokies being in the major bowl games of the Sugar Bowl (1995) and the Orange Bowl (1996), just 5 years removed from being an "average" independent team.  The guy who was credited for their success?  Frank Beamer.  Beamer is credited with having a strong balance of offense, defense (which was spearheaded by defensive coordinator Bud Foster), and special teams.  The latter being his signature of having some of the best special teams squads of blocking field goals, punts, getting strong returns, and really revolutionizing the game with that aspect.  It created nightmares for opposing squads.  This would be later known as "Beamerball"

Virginia Tech was a frontrunner in the old Big East, but given that Miami was down after their big run in the early 90's while West Virginia was up & down and the likes of Boston College and Syracuse being up and down over that span, many didn't give the conference a lot of thought.  So when the mid-90's transformed to the late 90's and the Hokies were near the top, not many really paid attention. 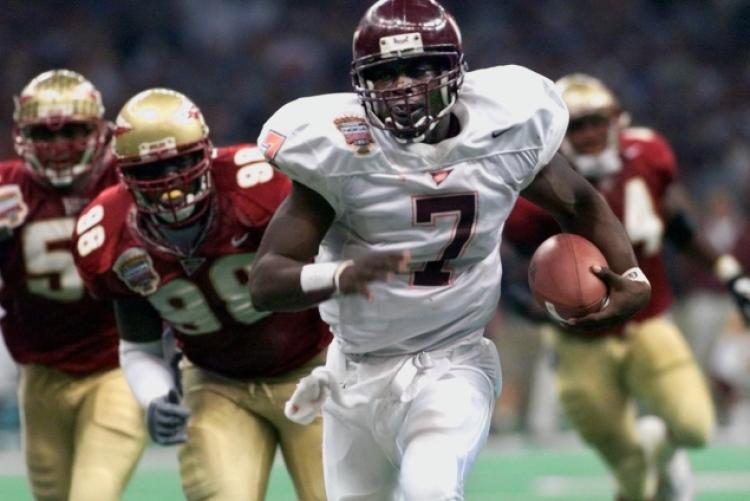 Michael Vick came close to getting the Hokies to a national championship in 1999.

Vick's exciting play matched up with Virginia Tech's all around balanced play guided them to the National Championship appearance in 1999.  The Hokies lost to a strong Florida State squad, but were a quarter away really from getting that first national championship thanks to Vick's amazing play.  And it also put the Hokies on the map in terms of college football.  Now did they get the same recognition as the likes of Ohio State?   No, because they were not really a talked about program, but they were getting there. 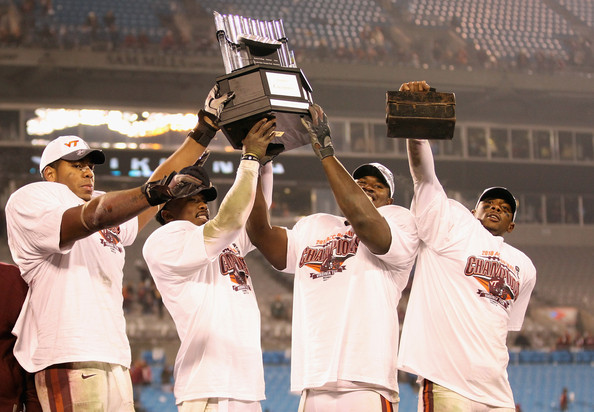 Winning the ACC Championship was the norm for Virginia Tech when they first joined the conference.

While Virginia Tech didn't match their 1999 season after that, they remained near the top of the ACC as Miami re-surged back at the top, winning 11 games again in 2000 and going to the Gator Bowl the year after that as well. When the first major shift of realignment happened, Virginia Tech, alongside Miami joined the ACC so the conference could presumably strengthen itself in football especially (Florida State had continued to dominate the conference without much of a fight).  Virginia Tech in their first year, continuing the same Beamerball that ran the Big East was dominating the ACC by winning the conference.  It was a start of a great run where the Hokies won 6 division championships and 4 conference championships.  Teams had little answer for the Hokies. 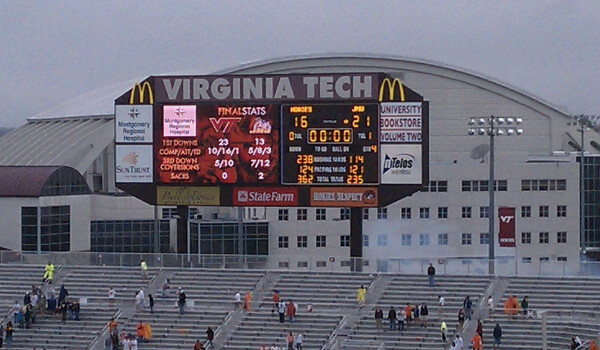 Losing to James Madison was a sign that the Hokies started to lose power on the conference.

Near the end of their run in 2010, the Hokies took an unusual stumble, being only the 2nd ranked team to lose to an FCS school in James Madison.  While Virginia Tech recovered and still won the conference, people started to go "yeah, but that conference isn't very good."  And there might be a case to that.  Miami crashed at that point.  Clemson and Florida State weren't the powers they are now and you had Georgia Tech being up and down every other year.  Fans and the media looked at the ACC as somewhat of the weakest power conference in football at that time. 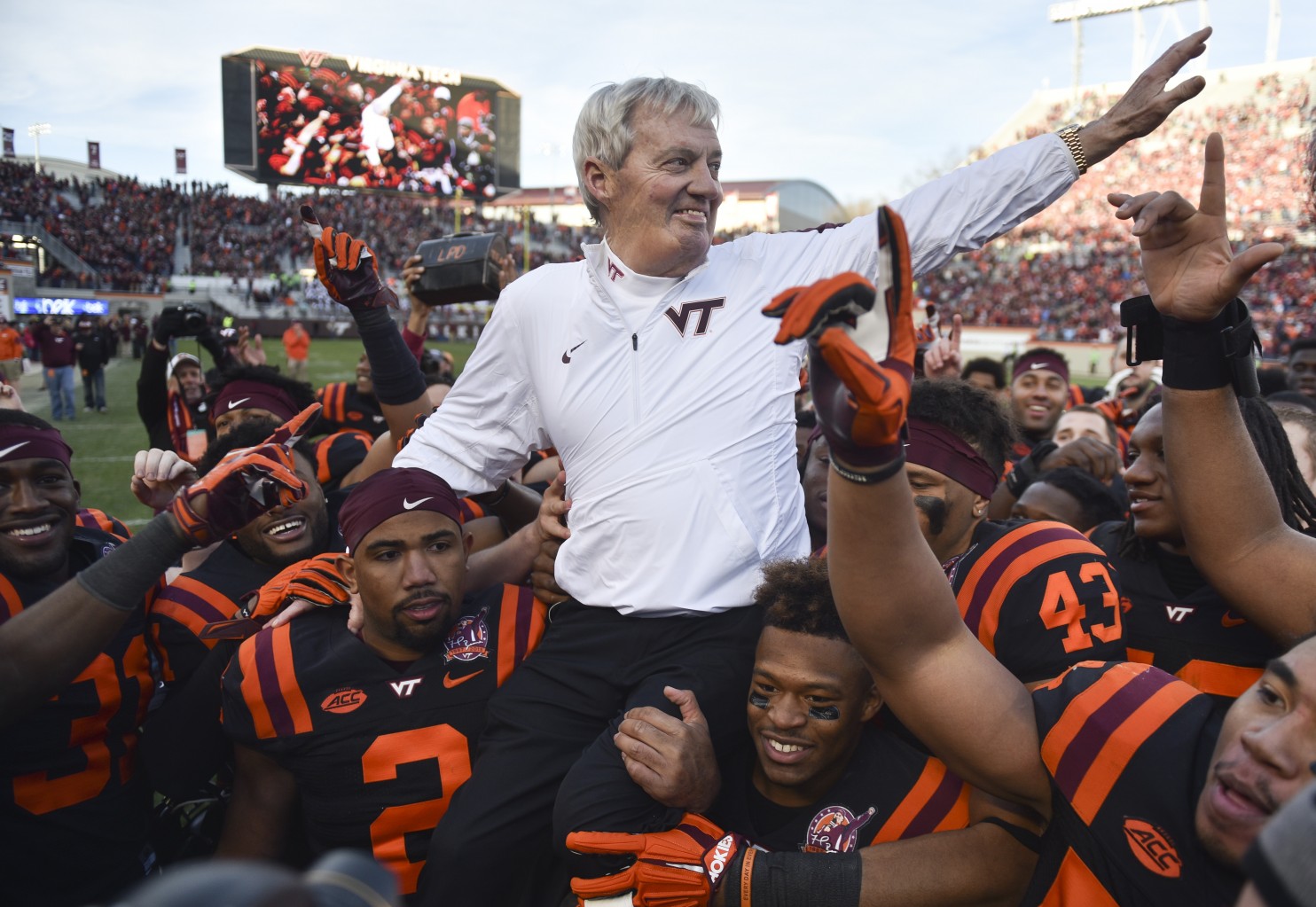 Players hoisted Beamer in his final game at Virginia Tech

But what it also did was show that the stranglehold Virginia Tech had on the rest of the ACC was loosening.  The offense sputtered and the special teams weren't getting those big plays anymore like they used to.  Since 2012 Virginia Tech has won 8 games only once and the other three times they finished 7-6, a far cry from their previous years.  Beamer's offenses greatly struggled from having the likes of Tyrod Taylor and Logan Thomas and just being unable to move the ball.  As the Hokies struggled in 2015, Beamer announced he would step down. 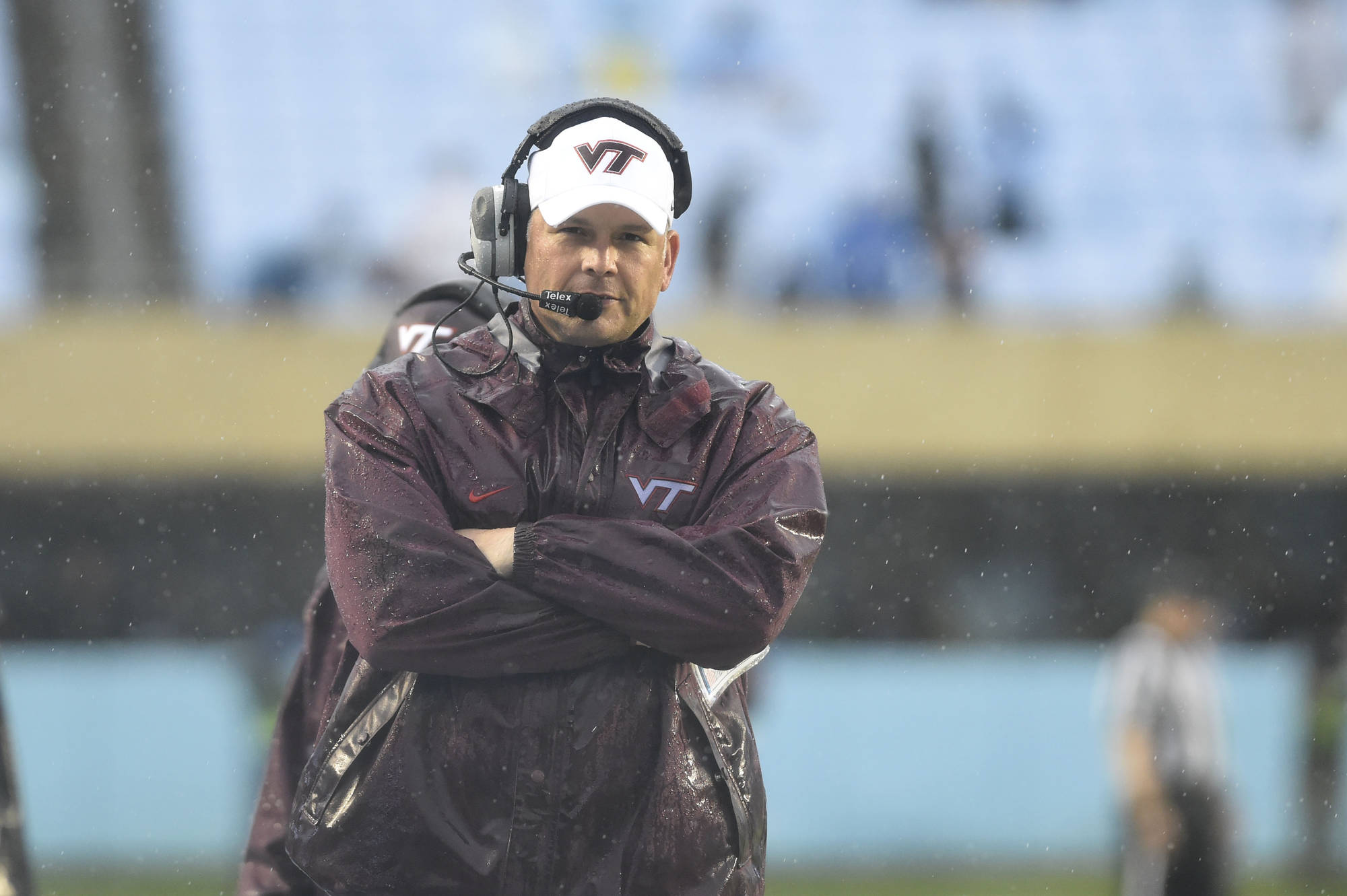 Fuente has gotten the Hokies back on track and has an offense that can put up points against anybody.
Bob Donnan-USA TODAY Sports

Fuente transformed a seemingly nonexistent Memphis program in 2012 and by his third year got the Tigers to 10 wins and an American Conference championship.  His offensive prowess alongside the help of Paxton Lynch made him a hot commodity for coaching hires in 2015.  Virginia Tech, needing a jolt on offense, brought in Fuente as the old days of power football went out and more of a spread offense has taken shape.

It hasn't fully paid off, but the dividends are starting.  The biggest jolt has been the upgrade in the running game.  The Hokies have 194 yards per game on the ground, up from 159 yards last year.  While the numbers dropped a bit this weekend in Chapel Hill during the monsoon, the Hokies offense looks legit and will only get better the rest of the way. 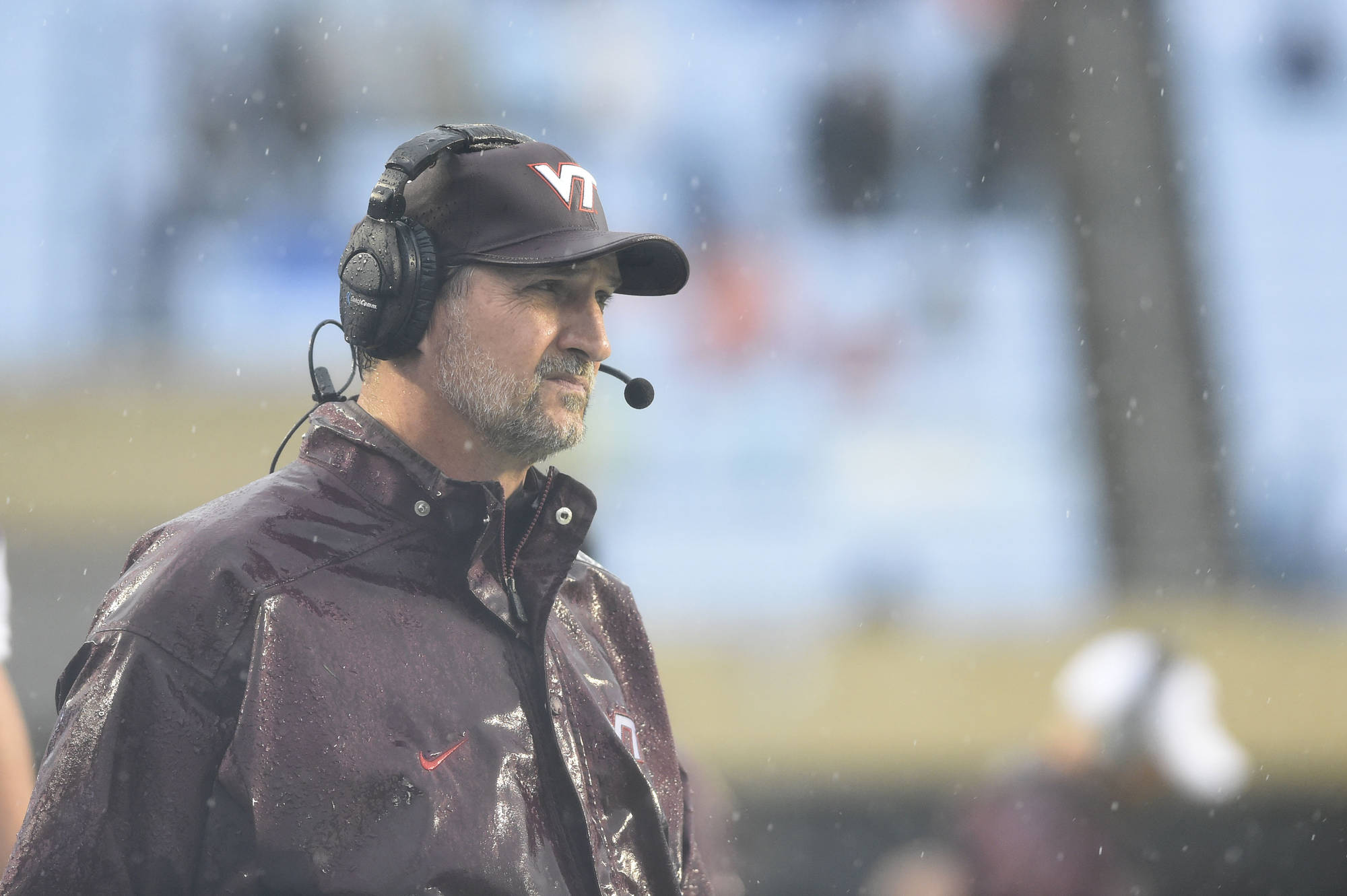 Bud Foster's defense is one of the best in the nation without question.
Bob Donnan-USA TODAY Sports

The defense, however, still being led by Bud Foster, has been the major stalwart as they are top 20 against the run (105 ypg), 2nd against the pass (135), and 3rd overall in yards allowed (10th in points allowed).  So the littlest improvements on offense is having the Hokies win four of their first five because Foster's defense is rolling big time.

So there are questions to Virginia Tech and if they can really compete for the ACC because with the Hokies dismantling North Carolina and Miami also losing, they are now in the driver's seat.  Can they win the ACC and be a threat to Clemson?  It goes to show you need a physical defense, and the Hokies have that, to give Clemson fits.  Can they keep it up?  I think so as the schedule becomes fairly favorable the rest of the way.

Now, it might take another year or two before Fuente REALLY gets this program off the ground, but the thing is, this team is already responding on both sides of the ball which is very scary.  The best part is, they do not see the Atlantic's Big Three unless it is in the ACC Championship game.  That is huge. And Miami is at home so really the major hurdle the rest of the way might be a road game in Pittsburgh after that Miami game.  If the Hokies offense continues to improve, I do not see anybody stopping Virginia Tech the rest of the way.  Which will open the door to bigger and better things down the road as well such as stronger recruiting and keeping guys in the state (such as 4-star recruit Tahj Capehart).  But what is being seen right now from Virginia Tech is that they are back.  And the ACC should on notice.

The Obstructed NCAA Preview for Week 7