The Deciding Factors of the 2017 Phil. Cup Finals 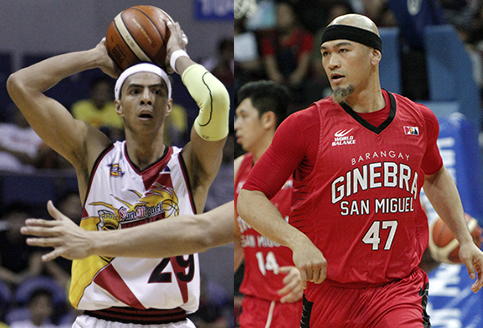 Two teams took different paths to reach the Championship round. San Miguel was a dominant force from the get-go and managed to survived a scare from the Tropang Texters. On the other hand, Ginebra rose up from the 7th spot to win a ticket to the finals.

So, what are the three things that will determine this Finals? Let us see.

#1 Arwind Santos
Out of the powerhouse starting five of San Miguel, Arwind is the most unpredictable. Fajardo will always manage to get 20-10, Cabagnot will always be a positive in their offense and will knockdown majority of his crunchtime shots, Lassiter will still be the best 3-and-D wing in the game and Ross will always worked his butt-off on the defensive end and make one or two amazing passes.

Santos is the outlier. Arwind is the kind of guy that doesn't loss confidence and will keep shooting even though he missed his last ten shots. Ginebra could use that to their advantage and destroy the flow of the Beermen.

On the other hand, San Miguel should help him out in maintaining his efficiency and effectiveness on both ends of the court.

#2 Rebounding
Ginebra is playing the slowest pace in the league which makes every rebound, more important. They will face the #1 rebounding team in the league so it will be a big sway in their favor if they manage to even just equalize.

On the other hand, San Miguel should flex their muscle and emphasize that they are the much bigger team and control the flow of the game. Pocketing offensive rebounds will be a huge factor because it will give their star-laden line-up more opportunity to get into their groove.

Coach Leo Austria loves to juice out as much minutes as possible from his starting line-up. After a rigorous seven-game series with TNT, the negative effects could be realize early into the Finals series. That will mean bigger responsibility for their role-players like Gabby Espinas, YDO, RR Garcia and Ronald Tubid.

On the other hand, Ginebra don't have the depth that San Miguel have. They have proven veterans on their bench that can spark something good but could be non-factors. The more consistent bench will give a big advantage to their team.