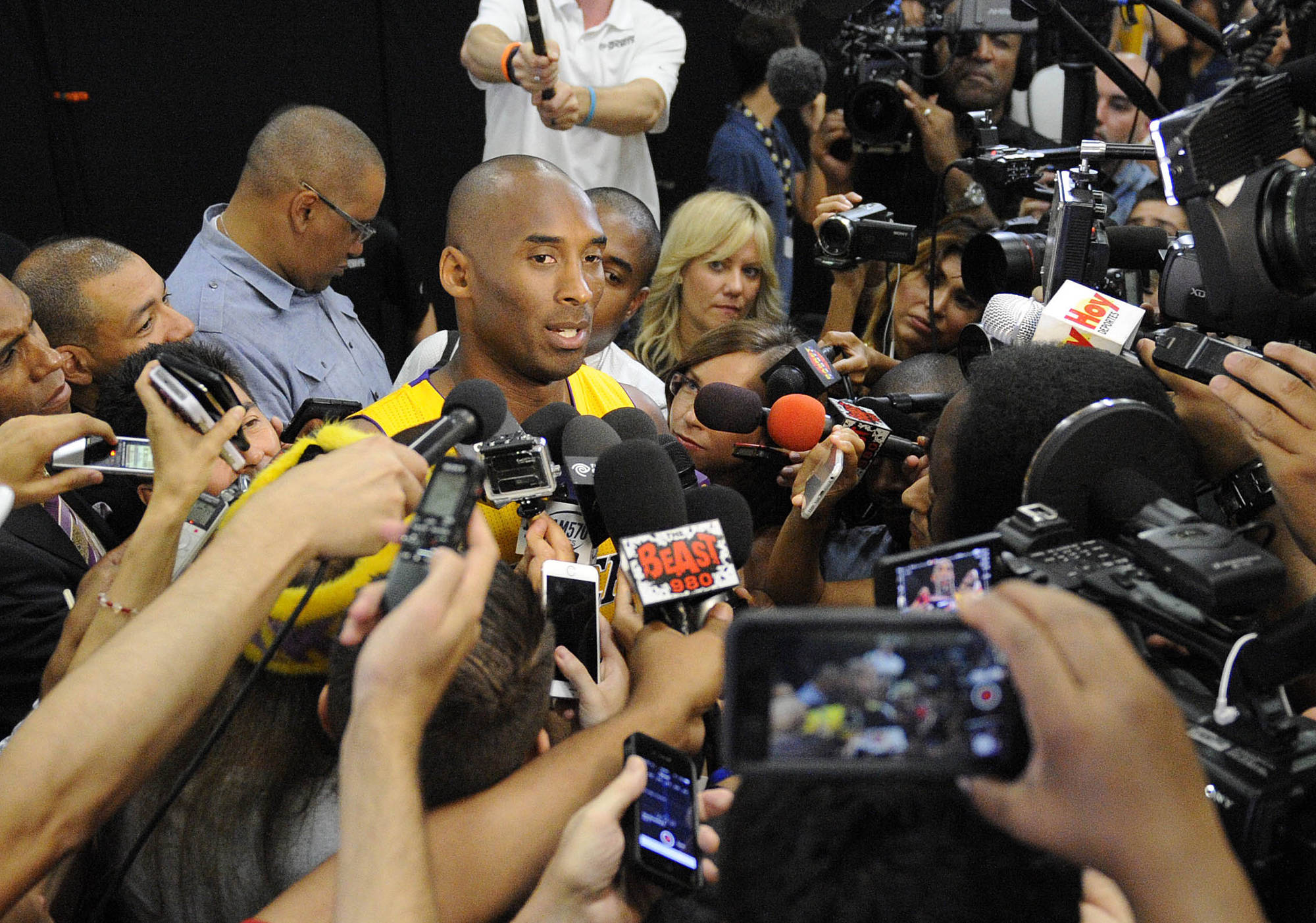 Kobe being swarmed by the media.
Gary A. Vasquez-USA TODAY Sports

The Los Angeles Lakers enter the 2015-16 campaign not with championship aspirations, but rather with the hopes of not repeating what was the worst season in franchise history. With a winning percentage of .256 last season, a healthy Kobe will ensure that this result will not happen again under his watch. As a Laker fan, it has been disappointing to see this team struggle and temper down expectations. Having grown up in the Phil Jackson era where the team was expected to compete for a championship, the current purple and gold team has the feel of a JV team. There were no big name free agents that headed to LA over the summer, with most acquisitions brought in to assemble a team that can attempt to lure people into the stands. Laker fans, fasten your seat belts because it is going to be a rocky ride to manage a .500 winning percentage in the Wild Wild West. Below is a list of key acquisitions that should help the Lakers improve their win total from last season. 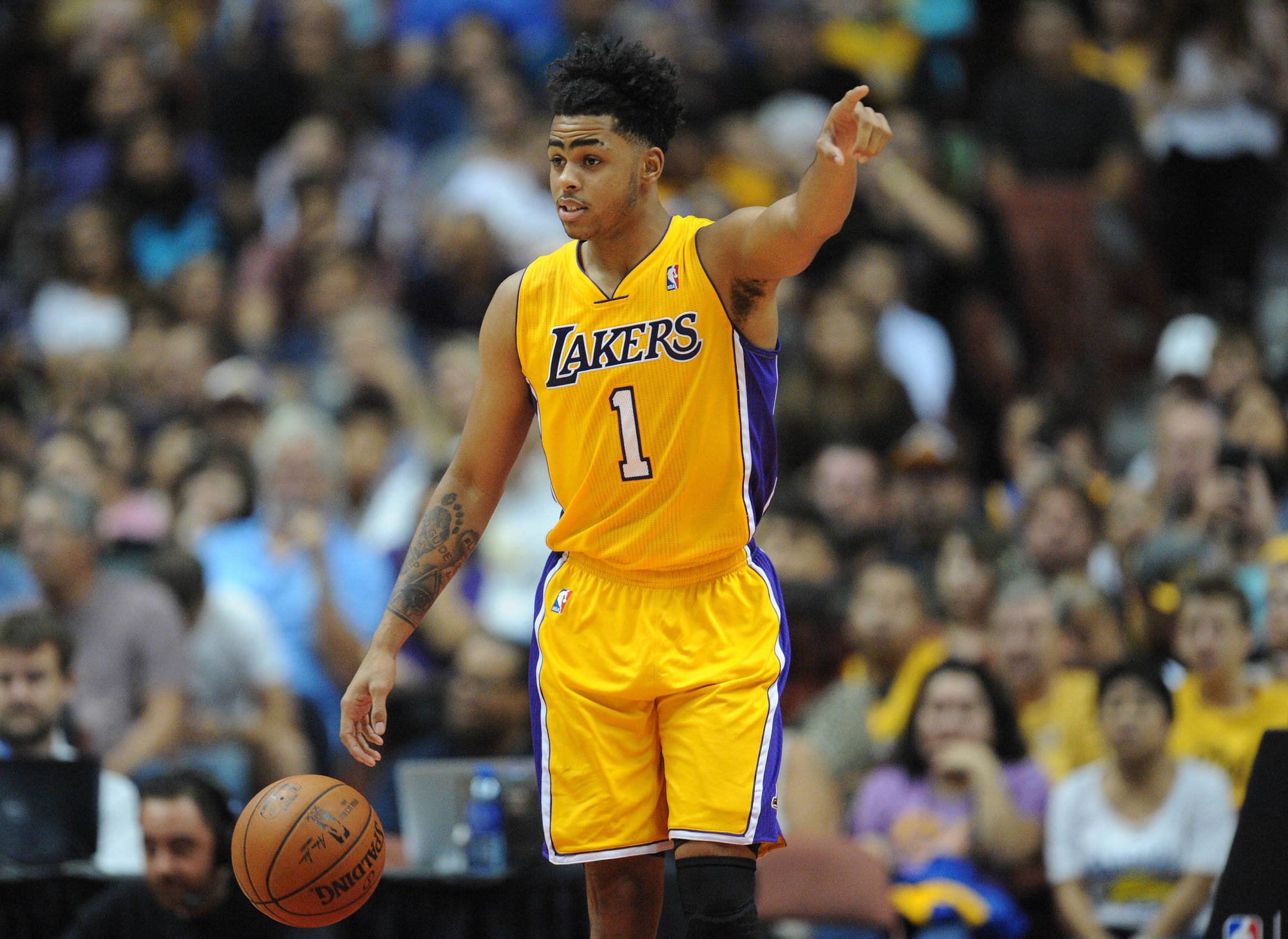 Rookie D' Angelo Russell enters Hollywood with high expectations. In a win now mentality that is LA, he is expected to be one of the major contributors to lead the team to the playoffs this year. At the young age of 19, it will be key for Russell to learn how to handle the spotlight that comes with being the PG of the future. A lot of fans, including myself, are still surprised that the Lakers decided to roll the dice with Russell over a more polished dominant center in Jahlil Okafor. While it may not be this year that the Lakers will reap the benefits for their selection of Russell, with time, hard work and the proper team around him, the Lakers are banking that Russell will develop into one of the key pieces that turns this organization around. 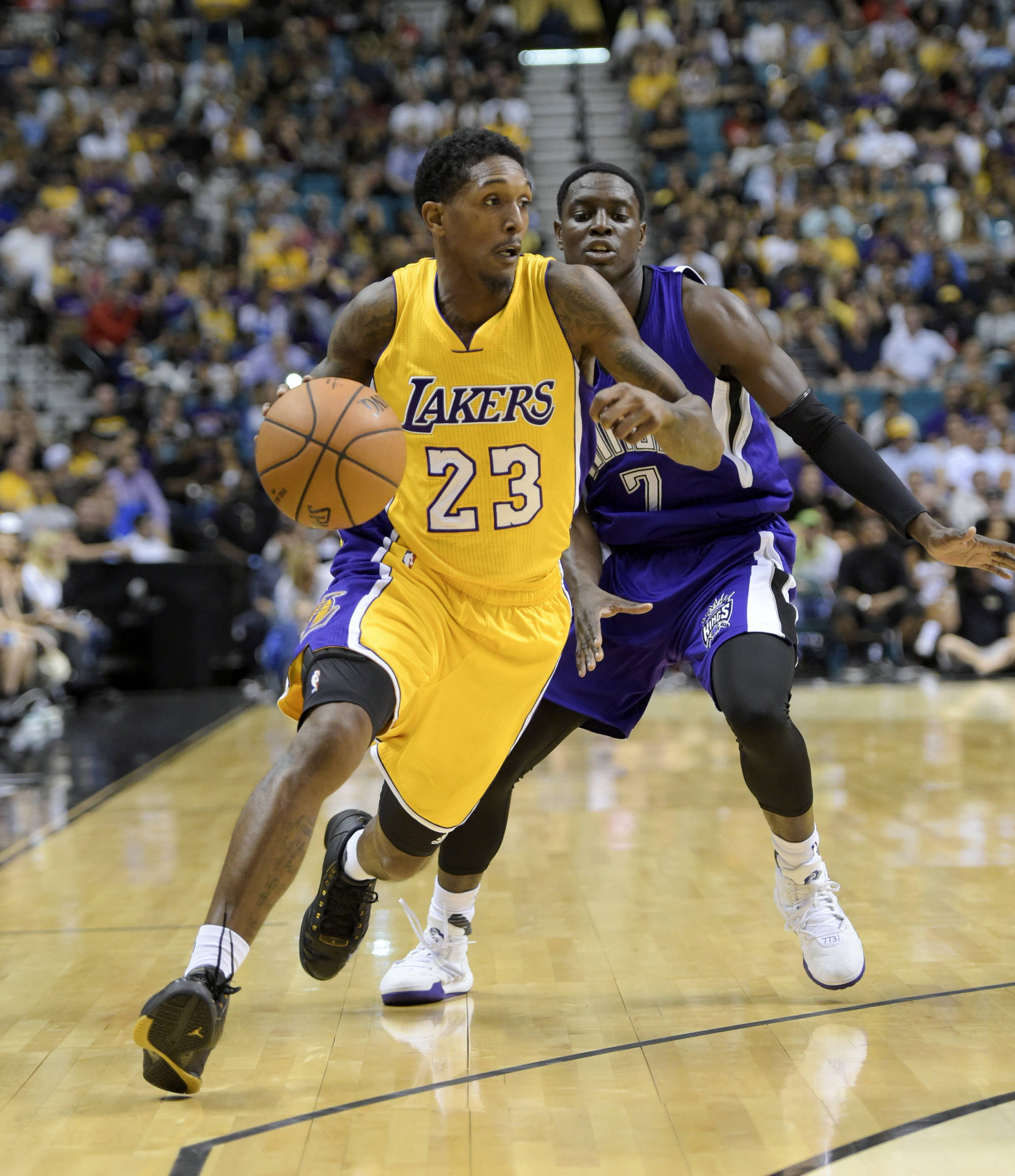 After winning the 6th Man of the Year award, Lou Williams looks to continue his sharp play as he migrates from Canada to the City of Angels. Coming off his most productive year as a pro where he averaged 15.5 points per game, Lou has the ability to create his own shot and be a positive force in the locker room. While it is yet to be determined if Lou will be a key part of the future once his three year contract is up, one thing that is certain is that he will provide instant scoring off the bench which was an area the Lakers struggled in last season. 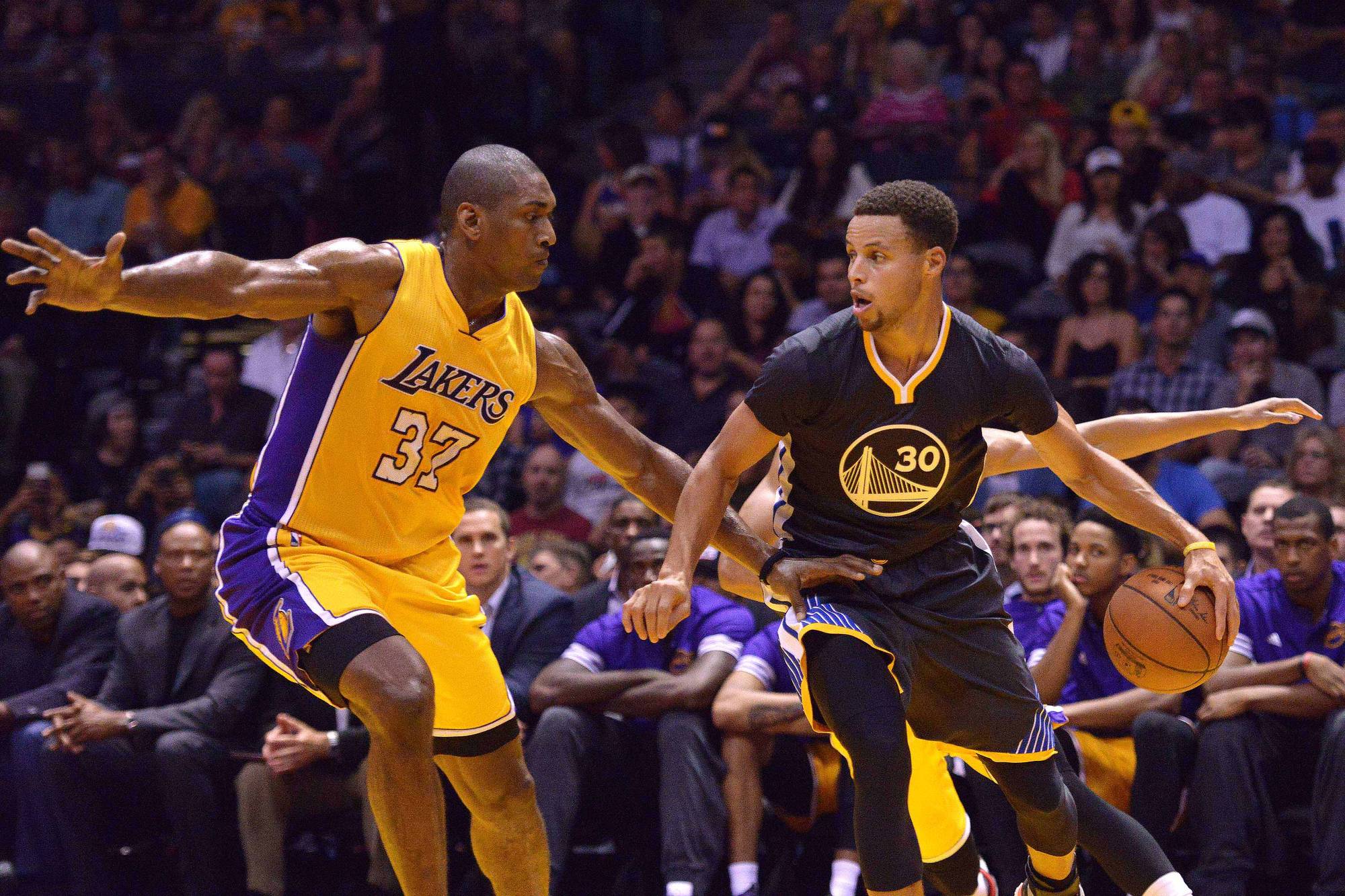 As part of the makeover for this season, the Lakers looked to the past to see if they could catch lightning in a bottle in Metta World Peace. After brief stints in the Chinese Basketball Association with the Sichuan Blue Whales and the Lega Basket Serie A with the Pallacanestro Cantu last year, World Peace signed a 1 year non guaranteed contract, meaning he will have to earn his paycheck on the court. The savvy veteran provides leadership and championship experience which will be valuable to the youngsters on the team as the Lakers try to find their identity in the next coming years. It remains to be seen how many years Metta World Peace has left in the tank, however, for at least this season he should be able to help the team defensively as the Lakers ranked second to last in defensive efficiency last season. 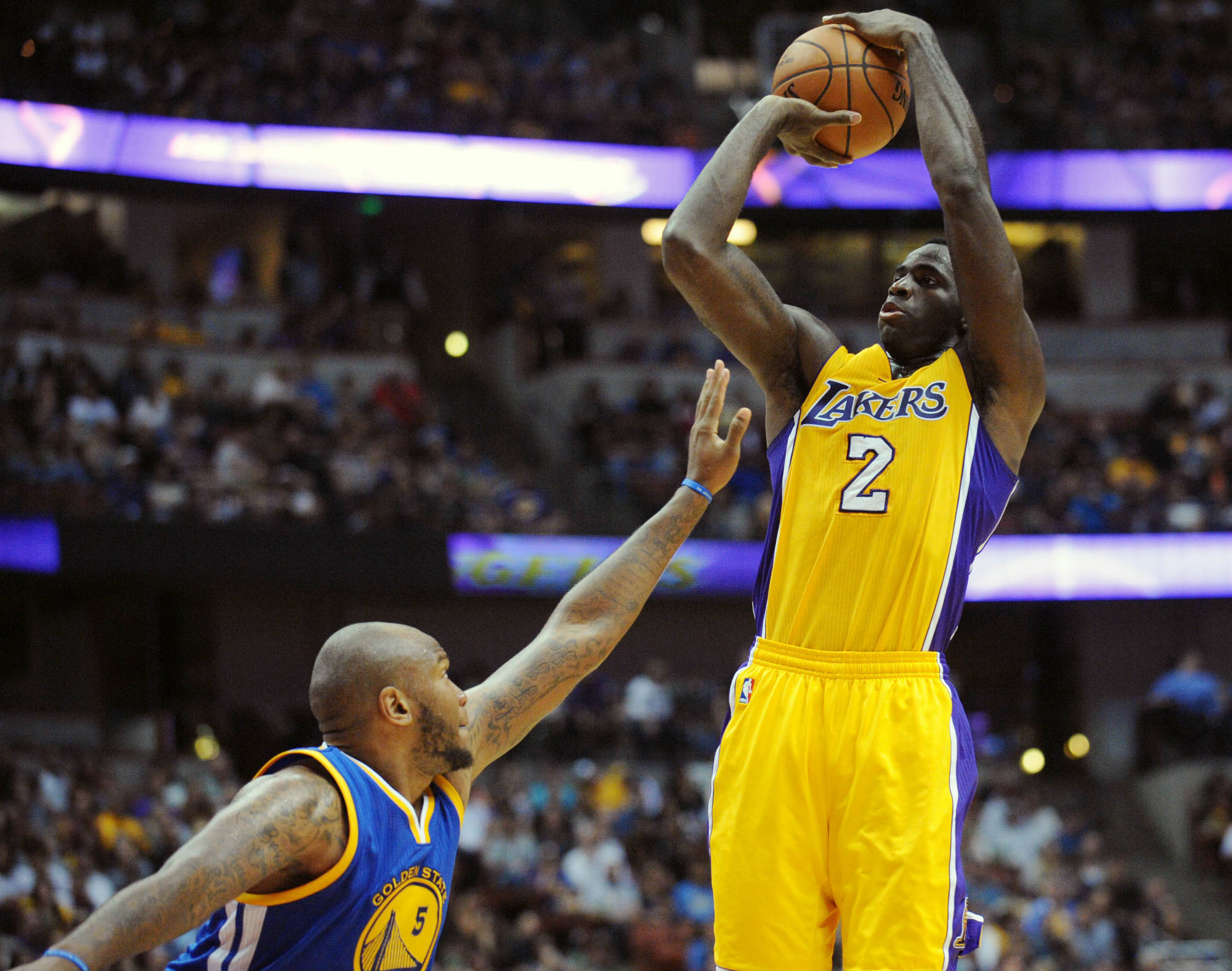 The two things you will not have to worry about with Brandon Bass is defense and rebounding. Coach Byron Scott will look to use Bass in a substitute role for Roy Hibbert and Julius Randle. One of the most underrated parts of Bass's game is his short to mid-range jump shot. When facing the basket, Bass provides a reliable outlet for making shots anywhere from 12-15 feet away from the basket. His biggest attribute will be his hustle and contesting shots on the defensive end of the floor.

Probably the biggest yet most underrated move of the off-season was the trade for Roy Hibbert. A lot of criticism has been made for the trade because the league is moving away from bigger dominant centers and more to quick moving guards. While this may be the trend, it does not necessarily mean that it is the only way to find success. Look at the San Antonio Spurs who have built a championship contender with Tim Duncan as the constant of their team. Even not too long ago, Hibbert's Pacers were one of the obstacles in the Heats way to winning the Eastern Conference Finals. If Hibbert is able to return to his form from 2 to 3 years ago, I believe Laker fans will be content given that they only had to give up a 2nd round pick to get him.

If you are one of those fans who thinks that the Lakers are going to compete for a title this year, I'm sad to break it to you, but that is simply not realistic. Even with the addition of a healthy Kobe Bryant, Julius Randle and D'Angelo Russell, there are not enough quality players on this team to compete for an 8th seed in the West. It will take time and hours of practice and game-time experience to figure out the chemistry within the team as they learn how to play with one another given the amount of turnover that has taken place over the past couple of seasons. With no big splashes in free agency, the Lakers will have to find a way to compete and scrap for every victory and should instead use this year to grow and mentor the younger Lakers on how to build and sustain success. The Lakers won't be as bad as last season, however I think that 30-35 wins is realistic.

Other Posts About Lakers

Top Storylines in the Lakers-Heat Finals