Hi Everybody LeBron James and Charles Barkley are at it again. This time it's because of how bad the Cavs played in the month of January and because of Cavaliers ownership decided not to spend anymore money to get new Blood. James wanted to get Carmelo Anthony but Cavaliers Management said no to that and decided to stick with the rooster they had. Well James decided to keep quiet after what Sir Charles Barkley said But after the Cavs lost to the Dallas Mavericks on Monday Night LeBron Had enough. Charles Barkley the BIG GOOF BALL HE IS called LeBron a ' Whiny Little Brat and Inappropriate to Insult Cavs Management. It was about Time LeBron spoke out about this excuse of a TNT Jerk. 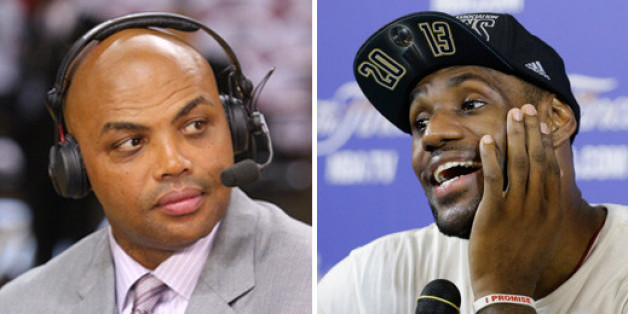 Once Again Charles Barkley stepped on LeBron James Foot in the Wrong Way. Here's my take, Charles Barkley is nothing but a Cleveland Cavaliers HATER. May I remind you last year in the Playoffs he was cheering for somebody to take LeBron out of the game due to injury. Barkley is nothing but A Lump Of Turd that needs to be FIRED FROM TNT ONCE AND FOR ALL!!!, AND CAN I PLEASE GET AN AMEN ON THAT!!!!!. But I will say this LeBron James was a little out of line for what he did going after management. But he was frustrated only going 7-8 in the Month Of January. But as for the so called, Sir Charles Barkley, you need to admit you hate LeBron James. Let's Look at what LeBron James has done. He has 3-NBA World Championships. He fulfilled his Promise to bring a championship back to Cleveland. James could be on his way to being the Next Michael Jordan. Now what has Sir Charles Barkley done, He's been in a few brawls with Bill LAMBIER of the Detroit Pistons back in their Bad Boys Days. He's Pushed officials and he has said I'm Not A Role Model. Well Charles that's the truth and that's about the only truth you have told in your career. And I closing I will say this. LeBron was out of line with what he did I will agree with that. But as for Charles Barkley just do us a favor and that is JUST SHUT UP AND RETIRE. And as for LeBron James you need to worry about bringing home another World Championship to Cleveland. P.S CAN I GET AN AMEN FORM SOMEBODY FOR CALLING THIS LUMP OF TURD CHARLES BARKLEY.

Superbowl LI is upon us, Who Has the Edge.

Charles Oakley is arrested after altercation at…

Other Posts About Cleveland Cavaliers

Cavaliers' Allen out indefinitely with finger i…