How The West was Lost 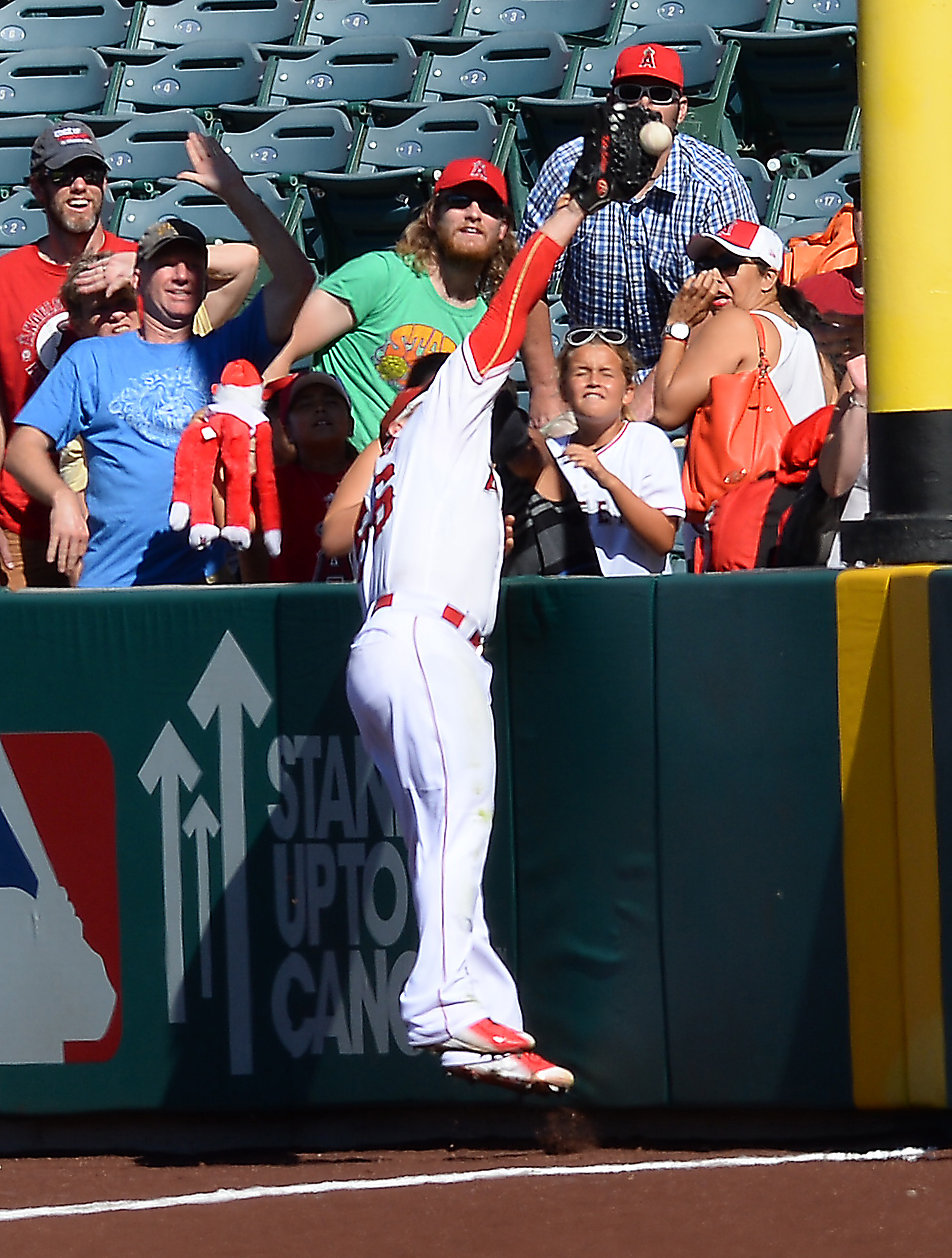 As I watched the Kansas City Royals punch their ticket to the ALCS against the Houston Astros, I kept feeling knots in my stomach as I reflected on how the Los Angeles Angels could have exact revenge against both of these teams, had only certain circumstances bounced their way. I'm not naive enough to say that the Angels would have ended up in the ALCS; however, I would be remiss if I did not state that the Angels had many opportunities to extend their season by at least one more game.

I could reflect on the last game of the season where Garrett Richards was unable to get out of trouble in the 5th and how the Angels were unable to manufacture runs beyond the 1st inning. I could recall game 3 of the series before against the A's and how the bullpen could not preserve a 2 run lead with only 8 outs to go in the game. However, when I look back on all the golden opportunities that the Angels had to extend their season, the one inning that sticks out is the top of the 9th on September 13th against the Houston Astros.

Maybe it was the number 13 that had it in for the Angels before the game even started for all I know, but after witnessing the collapse in person, I knew this game would be the one that cost the Angels the playoffs. It was my seventh home game that I attended, and I felt confident as I climbed to my seat in the upper deck near the left field foul pole. All the previous games I attended had ended in Halo victories, so I was excited to see number 7. To be honest, I felt like I was their good luck charm. The Angels were finally turning their season around going for their 8th straight win against the Astros, whom the Angels trailed by only 4 games. This was plenty of time to catch up in the standings considering there was 3.5 weeks left in the season and another 3 game series against Houston in a couple of weeks. The match-up was favorable, statistically as the best ERA pitcher for the Angels, Andrew Heaney was set to start.

The game was chugging along just as I had assumed with the Angels up 3-0 heading into the 9th. To be honest, at this point, I was mentally calculating that with this win, the Angels would only be 3 games back and look to be in good shape with favorable pitching matchups in the next series. I was confident that with a 3-run lead and closer Huston Street coming to the mound that the game was in the bag.

As "Kashmir" started to play from the stadium speakers and Street headed towards the mound out of the bullpen, I started to get goosebumps and got out of my seat knowing that the Angels were getting hot at the right time of the season. As soon as the inning started it seemed as though it would be an easy 3 outs with a 3 run cushion. Unfortunately, I was in for one of the most gut wrenching losses of the season.

The inning started off great! Jonathan Villar hit a popup to left for the first out followed by a strike out against Luis Valbuena. The Astros were down to their last out. The crowd was on its feet as there was 2 strikes on Preston Tucker. I was ready to post "light up that halo" on my Twitter handle. In my mind, I was telepathically trying to tell Street to challenge Tucker and throw it by him as fast as he could. From my vantage point, we were up by 3 with no one on base, so worse case scenario Tucker hits a home run. The count was 1-2, Street throws a hard fast ball and immediately after it makes contact, you knew the ball was gone. The ball traveled well into the right field seats to give the Astros a glimmer of hope as they trailed 3-1. No worries, I thought, even though the worse case scenario came true, we are still only 1 out away from a sweep.

Next batter up was George Springer. Again, Street was able to gain the upper hand in the count at 1-2. Springer battled off some tough pitches until he hit a triple into right field. At this point you could feel the air being let out of the stadium as fans started to become restless and wonder if the Angels would ever get the 27th out. The very next pitch is a single to center hit by "Mr. Reliable" Jose Altuve, bringing the Angels lead down to 1 with the score 3-2.

Remember, all the Angels need is 1 more out and the game is over. Then the next play happened, which I can only explain as some sort of divine intervention. Carlos Correa, one of the top candidates for Rookie of the Year, came up to plate. I'm sure the Angels wanted to see anyone but him. As it turns out, the Angels could not ask for a better opportunity to get him out. Correa hit a sharp grounder to 2nd base. Taylor Featherston made a diving stop and goes to throw the ball to 1st. The only problem was that the ball got stuck in his glove, making it unable for him throw Correa out. I have never seen this happen before. The snowball effect was officially in play. If I could pause time and reflect on the following events that happened, it would take an incredible amount of will power to believe that Angels were meant to win this game. Even with everything appearing to go wrong, the Angels still have an opportunity to win the ball game, and even easier at this point with force outs at 1st, 2nd and 3rd.

To make the situation even more improbable, the Astros decided to pinch hit for Evan Gattis with Jed Lowrie who finished the season batting .222. If I were to show you the match up on paper and have you predict the most likely outcome, you would not have guessed what happened next. With only 9 homers on the year, Lowrie stepped into the batters box looking to keep the inning alive.

Street challenged him with a couple of fastballs that Lowrie was unable to catch up to. Then, in my opinion, in an attempt to mix it up and learn from the Tucker homerun, Street threw a change up that nestled right into the strike zone. Lowrie made contact and it looked like the ball was gonna be caught for the final out or worse case scenario hit foul. The ball seemed to float in the air forever, slowly reaching higher and higher heights. As I looked on from the upper deck down the 3rd base line, I thought for sure that the ball was hooking foul. I then noticed that Kole Calhoun had a read on the ball and was attempting to make a play on it. It appeared he was reaching over the short wall, however, it was unclear whether he caught the ball. I saw him jump up and reach up into the stands and fall to the ground. At this point I did not know what was happening. Did he come down with the ball to end the game? Was it foul? Or worse, did Lowrie's ball actually have the capacity to be hit over the wall on the left side of the right field foul pole for a home run? Both teams stared for what felt like minutes and waited as the umpire on the right field line assessed what happened. With disbelief on the face of Calhoun, I knew that the result wan't good. The 1st base umpire twirled his arm above his head in the air signaling a home run giving the Astros an unthinkable 5-3 lead. The inning eventually came to an end, however the damage had been done and not even the rally monkey could undue the damage that had been done on that day. 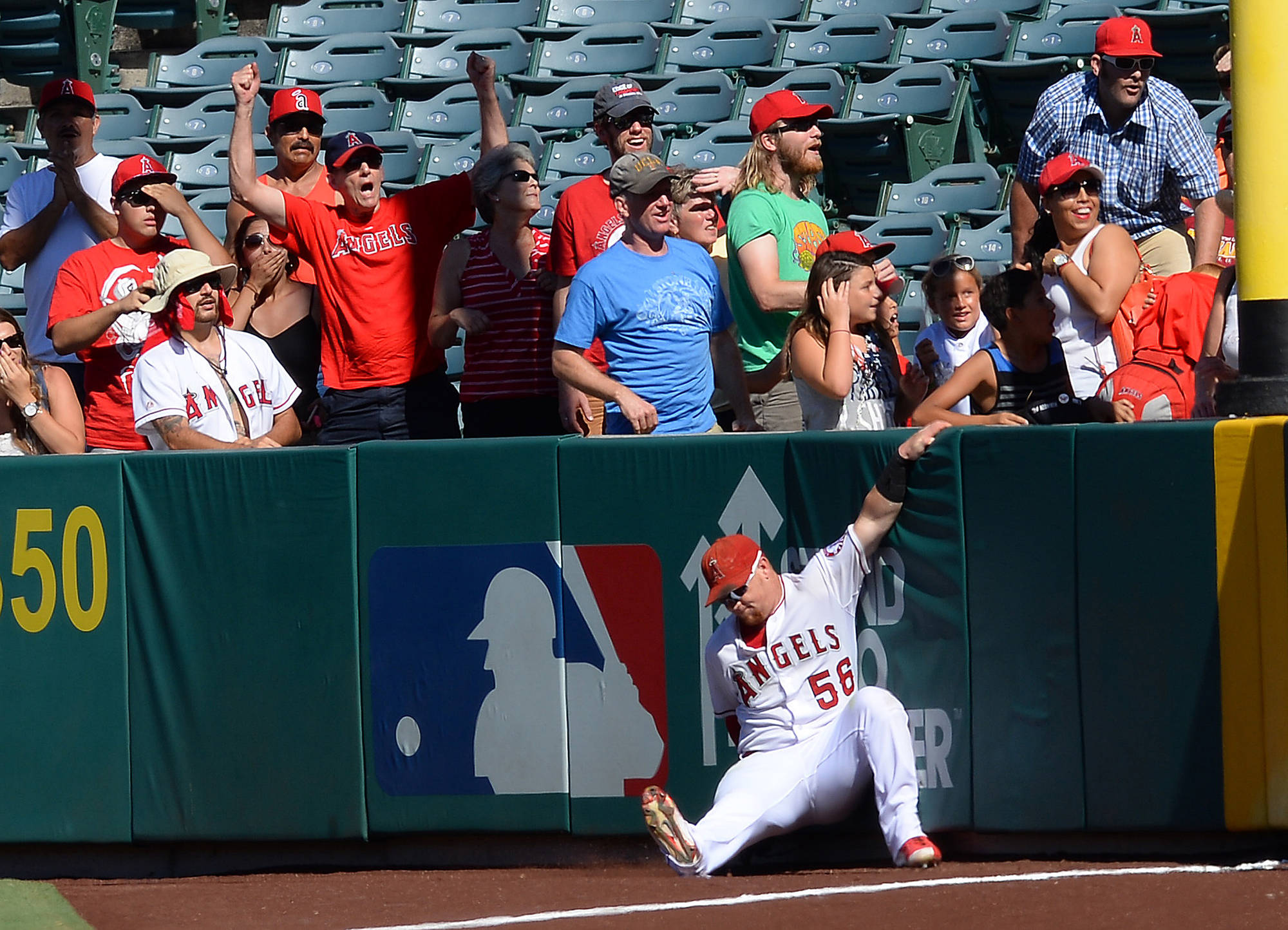 Kole Calhoun falls to the ground as he is unable to secure the final out to end the game.
Jayne Kamin-Oncea-USA TODAY Sports

While there is no one play or one game that players or managers will point to and say, "that was the moment that cost us the season," I am willing to acknowledge that there are some moments that are easier to take advantage of than others. September 13th was the Angels easiest, golden opportunity for a ball club that fell 1 game short of game 163. There is no individual to blame for this game's collapse. It was a perfect storm at the perfect time. From the ball mysteriously getting stuck in Featherston's glove, to Mike Scoscia keeping Street in the ball game, to Angel hitters unable to manufacture runs in the bottom of the 9th, it was not meant to be. The Angels only have themselves to blame. The Angels did not find a way to make one more play to make it to the postseason.

While this loss still haunts me, and I am sure a lot of the players and fans who witnessed the game agree, I'm still optimistic about the Angels future looking ahead to the 2016 season. While we can always ask what would have happened if certain plays were made here and there, the most productive use for the Angels' off season will be to put this season behind them and take to heart that this team fought all the way to the final game of the season. This is why we play and love sports, because while everything may seem to be certain and determined, the unexpected sometimes happens. All you can do is appreciate the game and know that sometimes the ball doesn't bounce your way.