Reason for Optimism for the LA Angels 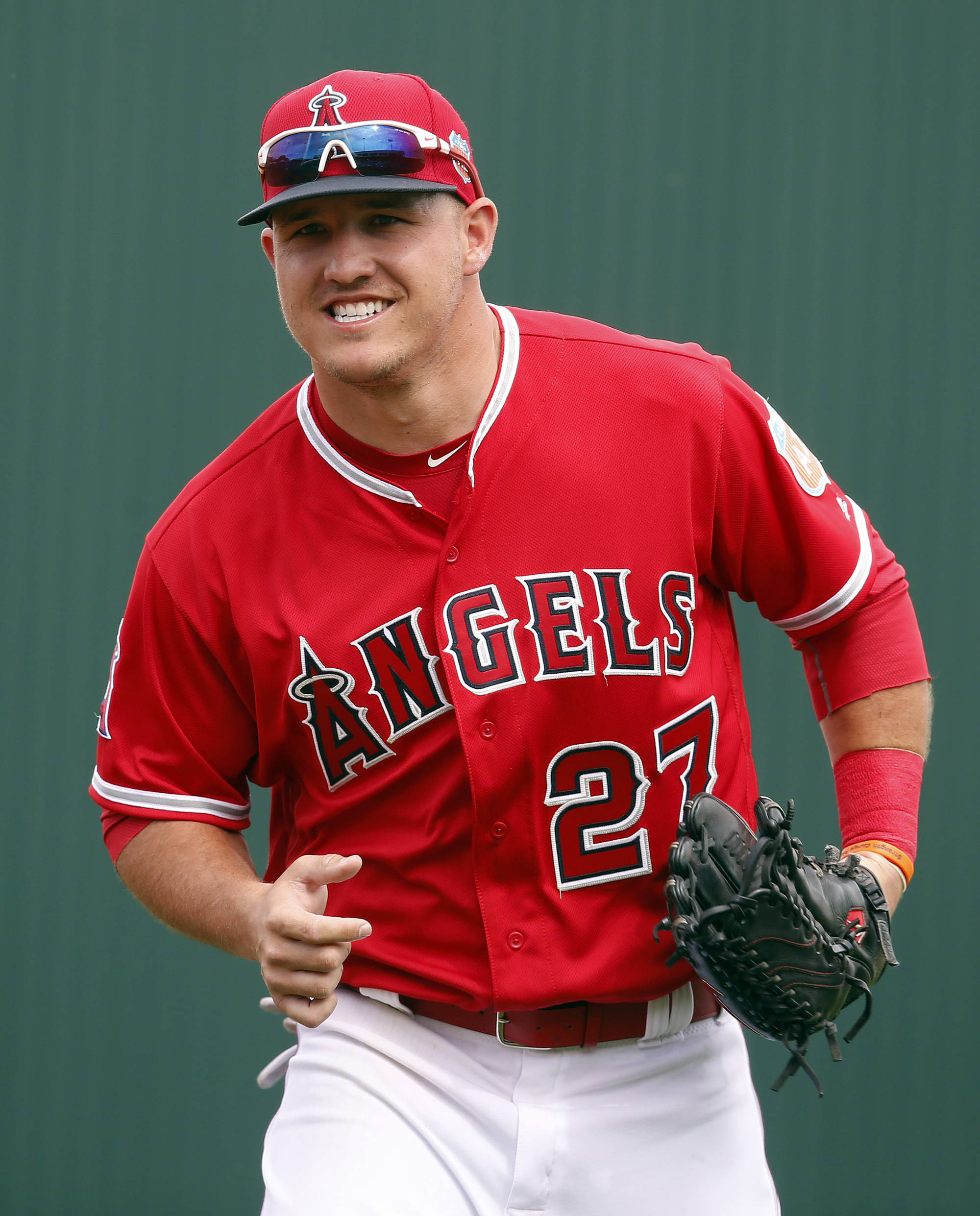 When Keith Law came out with his rankings of the MLB farm systems, a lot of experts wrote off the Angels because of their 30th ranking. Comments such as "wasting Trout's productive years," "no depth at starting pitching" and "lack of spending in the off-season" rang throughout the internet as predictions were made against the Angels to make the playoffs this season. And while yes the Angels have given up a lot of their future in recent years, experts have ignored the prospects who have developed and make significant contributions to the ball club as well as the assets who have been acquired in trades. Let's take a look back at some of the players who have developed through the Angels minor league system and the current assets that are setting up 2016 to be a success.

Look no further than the Angels best player Mike Trout. Arguably the best player in baseball, Trout was the product of the Angels farm system when he was drafted by the organization in 2009. Many overlook Trout's youth due to his MVP level of performance and the fact that he quickly rose to the majors after spending only 2 years in the minors. Considered a veteran in a lot people's mind, let's not forget that Trout is only 24 years old and has yet to reach his prime. Removing him from the minors did negatively affect the Angels farm system and for the better as the Angels cultivated the best player in baseball for the foreseeable future. 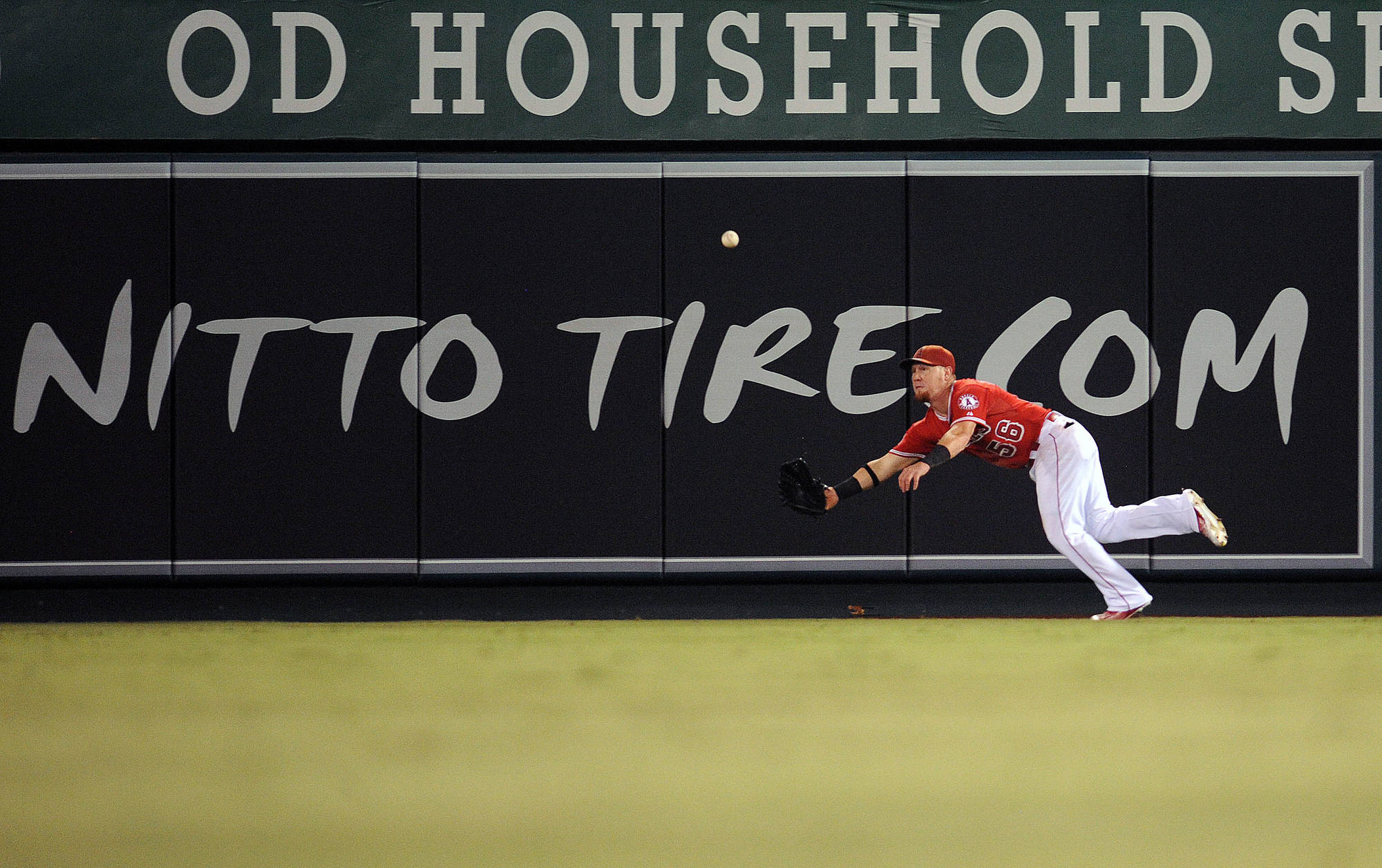 The next prospect that has contributed at a significant level at the big leagues is starting right fielder Kole Calhoun. Kole didn't make his big league debut until he was 24. While not a superstar like Mike Trout, Calhoun has proven to be a quality starter for the Angels winning his first Gold Glove award in 2015 with a fielding percentage of .989. People often overlook Calhoun's significance because there isn't a particular part of his game that stands out, he just has a good all around skill set to be a consistent everyday starter. Kole has quietly solidified the Angels right field position, a position that was vacant since the departure of Bobby Abreu in 2012, and is another successful product of the farm system. 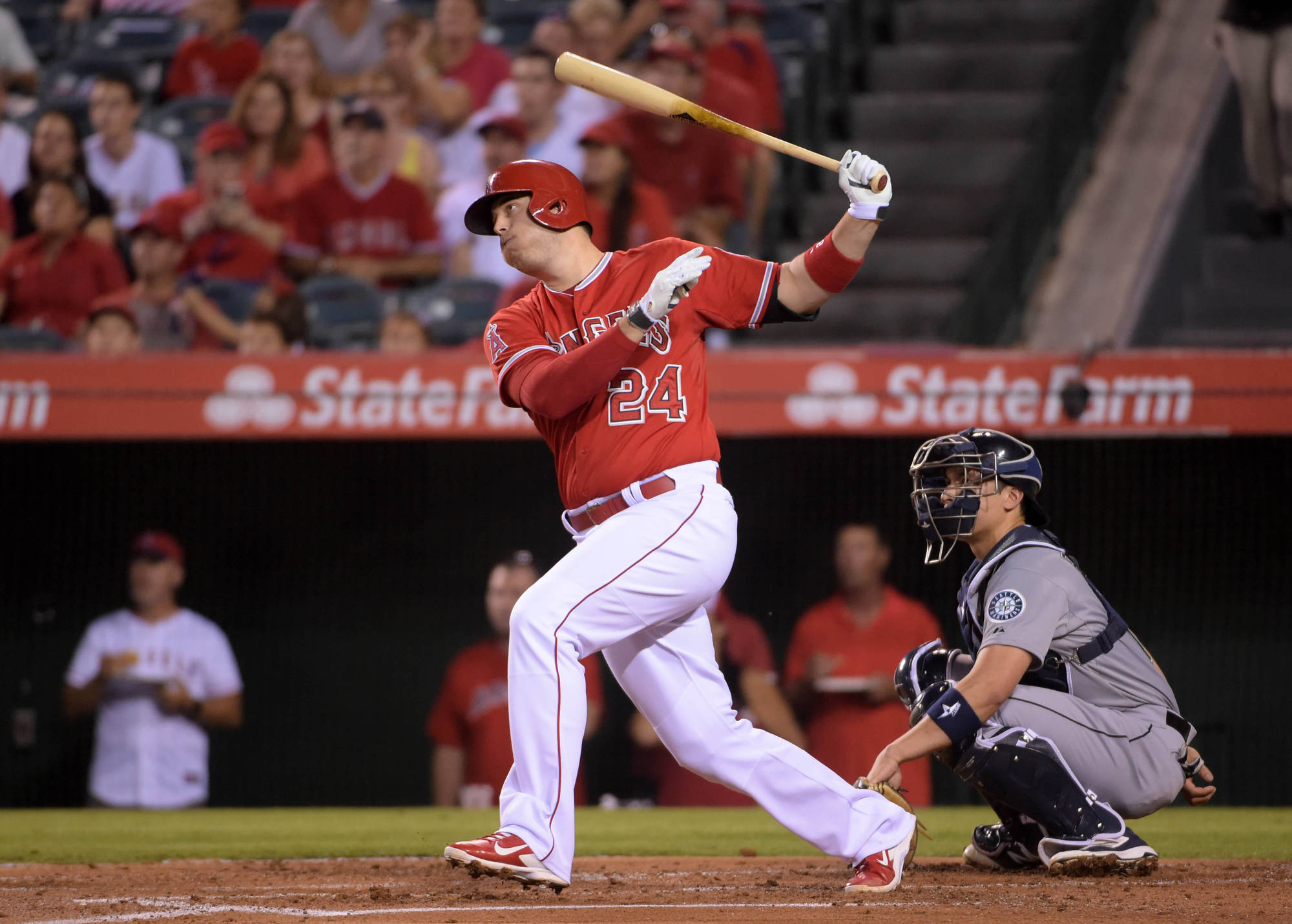 The most recent starting prospect and under the radar player that looks to have a breakout season is C. J. Cron. Drafted in 2011 by the Angels, Cron looks to fill the middle of the order with power as the Angels look for protection behind Mike Trout. Making his big league debut in 2014, Cron should see his home run numbers increase as he develops more patience at the plate and continues to use his natural power to blast balls out of park. Given the aging of Albert Pujols, Cron should have plenty of opportunities to start at 1st base this season as the Angels look to preserve Albert's career by placing him more in the DH position. Look for Cron to put up at least 25 home runs this season. 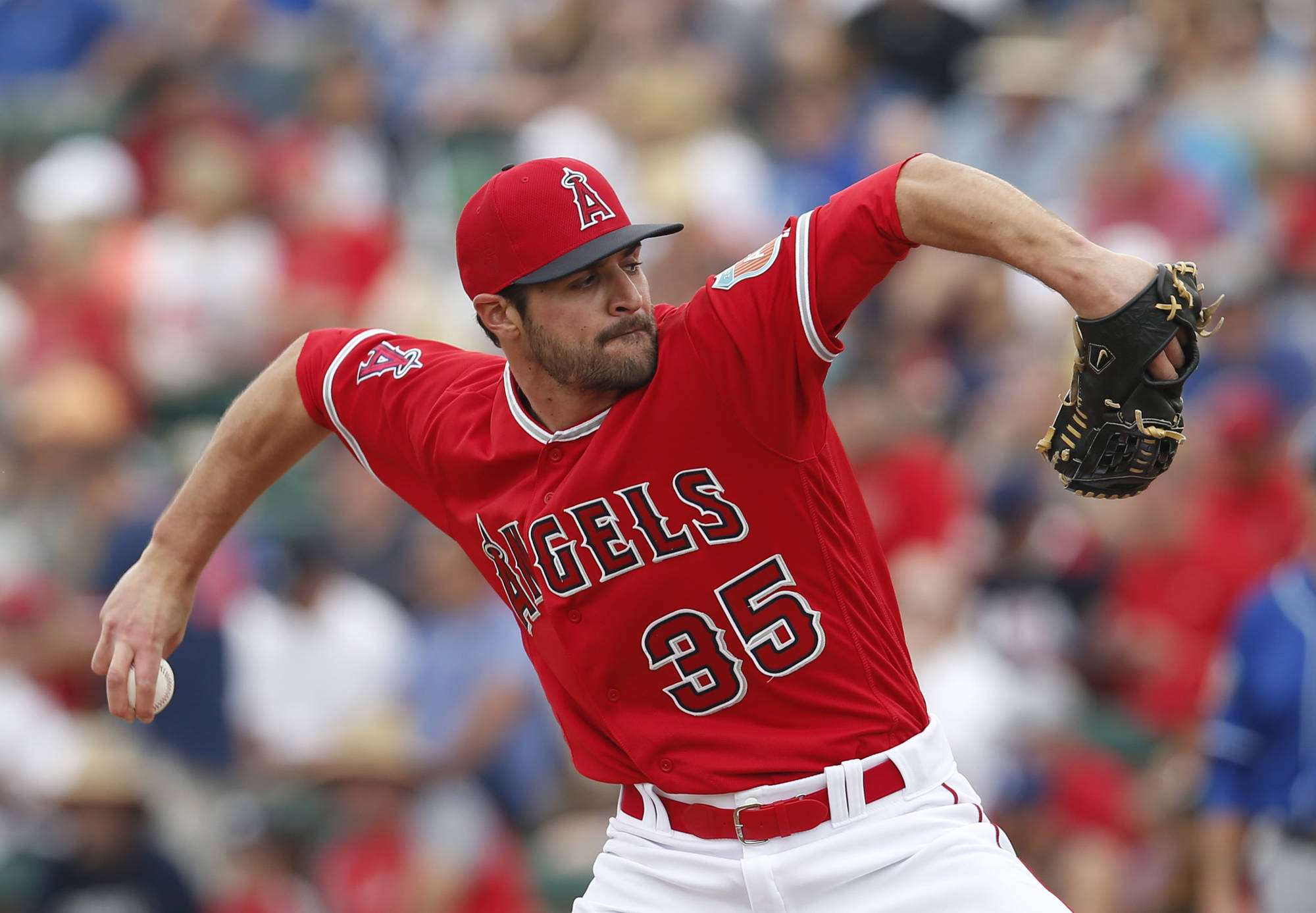 Besides drafting and developing caliber players like Trout, Calhoun and Cron, the Angels have done an excellent job at both retaining key pieces in place and knowing when to pull the trigger on prospects to get value in return. A perfect example of this kind of move was trading away Hank Conger. Conger was selected in the first round by the Angels back in 2006. He peaked with the Angels during the 2013 and 2014 seasons with a batting average of .249 and fielding percentage close to .990. With the understanding that the Angels wanted Chris Iannetta to be the main starter, the Angels shipped Conger to Houston for Carlos Perez and Nick Tropeano. The Angels definitely got the better end of the deal as Perez and Tropeano are competing for starting positions for the Angels while Conger is no longer with the Astros. 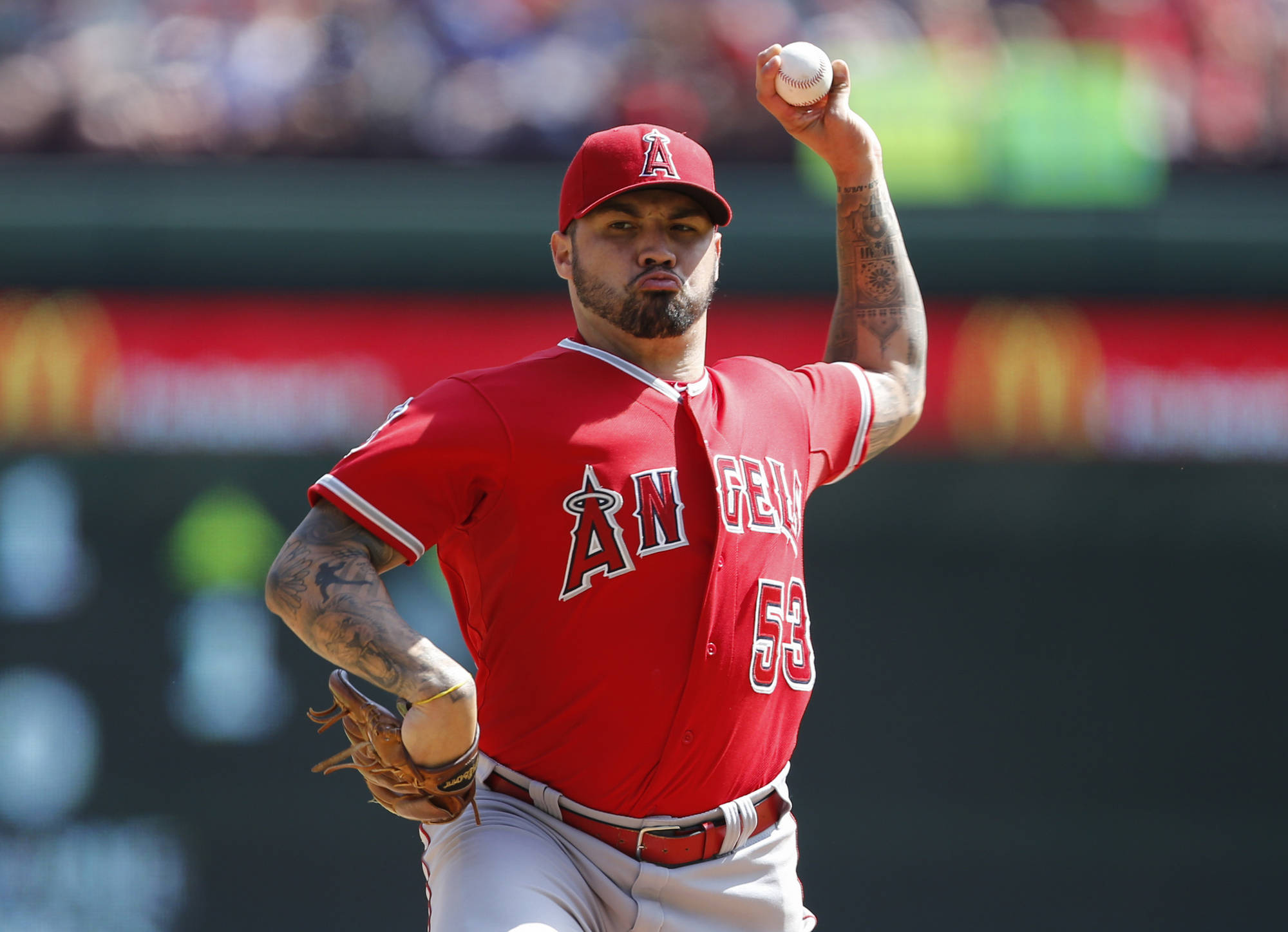 One of the tougher decisions made was trading Mark Trumbo for Hector Santiago and Tyler Skaggs. Trumbo seemed poised to be the future first baseman for the Angels finishing the 2012 season as an All-Star and a career year in home runs with 34 in 2013. In need of pitching however, the Angels decided to trade Trumbo to the Diamondbacks for starting pitching depth in Hector Santiago and Tyler Skaggs. As in the Houston deal, the Angels still have the players they traded for while the D-backs traded Trumbo shortly after his arrival. The Angels won again in this trade as Santiago was named an All-Star last season and Skaggs looks to bounce back from an injury-plagued campaign last season to fight for a starting position in the rotation. It was difficult seeing Trumbo leave, however in hindsight, the Angels definitely made the right move.

The most recent trade of prospects that has been under the most scrutiny was the trade of Erick Aybar, Sean Newcomb and Chris Ellis for Andrelton Simmons. I agree that the Angels gave up a lot for just one player, however there is no doubt that based on the present outlook of each player involved in the trade that the Angels got the best player in the trade in Andrelton Simmons. I would have preferred to see the Angels only give up one prospect plus Aybar, however with the trade the Angels solidify the short stop position for years to come while cleaving away an aging Aybar who showed signs of his age last season with a career low in batting average and career high in errors over his past five seasons. It is still to be determined whether or not Newcomb and Ellis will turn into everyday starting pitchers, however I much rather have certainty in knowing that the Angels secured the top defensive short stop in the game in Andrelton Simmons.

The Angels may be ranked 30th in their farm system right now however given their track record in recent years, they are sure to restock and replenish their system with players who have the ability to start at the major league level. With opening day only three weeks away, I am optimistic in the Angels roster and look for the Angels to continue to be competitive in the AL West and get back to the playoffs.